Kelly closed with a 2-under 68 to finish at 11-under on Firestone’s South Course to collect his second major title in the senior ranks. The 55-year-old has 10 PGA Tour Champions victories, also securing the Principal Charity Classic last month. 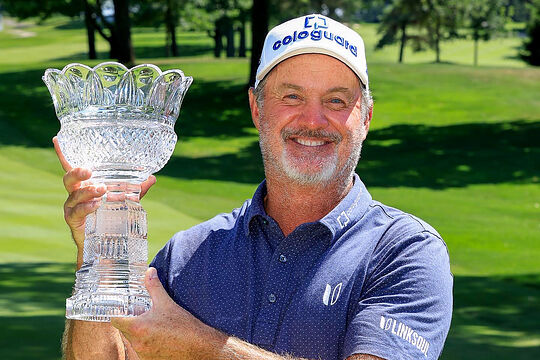 “The first major is awesome, but the second one, even more validation,” said Kelly.

“I’m really excited to go back to Sawgrass next March. That was a big piece of the desire in winning this tournament. That’s one of those great things that we have with our majors that we can get to go play at the high point of golf. I’m really excited about that.”

To date, Kelly has 17 professional titles to his credit, including three PGA Tour wins with his last at the 2009 Zurich Classic of New Orleans, and two Nike Tour wins. Kelly has been most successful on the PGA Tour Champion tour with 10 wins to date. His best result in a major on the PGA Tour was a share of 5th at the 2007 Masters.

New Zealander Steve Alker bogeyed the par-4 18th to drop into a tie for third with Ernie Els at 8-under-par. A three-time winner this season and the Charles Schwab Cup points leader, Alker shot a closing 69.

Rod Pampling finished the best of the Australians in a share of 11th position, a closing round of 68 moving the Queenslander five positions up the leaderboard. David McKenzie shared 50th position, with John Senden in a tie for 55th position. Mark Hensby finished in a share of 66th position with Robert Allenby in 76th.