Australia’s Test cricketers may be ruing opportunities lost by the rain in the current Ashes Series but at least one Australian sportsman has been a beneficiary of poor weather this week.

39-year-old Brad Kennedy was declared the winner of the Japan Golf Tour’s Kansai Open following a wash out of the final day’s play. 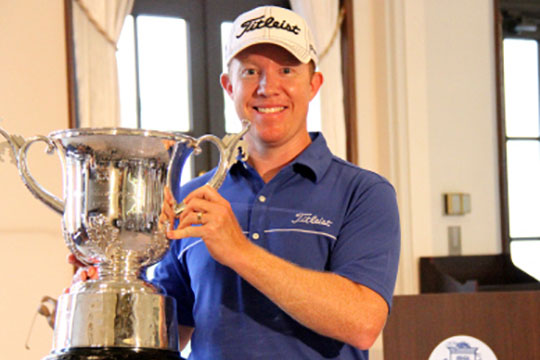 The Queenslander held a one-stroke lead heading into Sunday’s final round after rounds of 69-70-67 for a ten under par total. Play was then abandoned with Kennedy taking home the title ahead of Korea’s Sung Joon Park.

It was Kennedy’s second win in Japan after his Mizuno Open triumph in 2012 and his second victory of 2013, having won the Queensland PGA Championship at Toowoomba back in February.

New South Welshman Aaron Townsend enjoyed a much needed well-placed finish in his quest to regain playing rights in Japan for next season, finishing in outright fourth at seven-under par behind local Azuma Yano.

41-year old Richard Tate (T35th) was the only other Australian to make the cut in an otherwise dry week for the Australians.

The JGTO moves to the Vana H Cup KBC Augusta 2013 in Fukuoka next week.