Australian Brad Kennedy and New Zealander Jim Cusdin have taken the first round lead at the BMW New Zealand Open hosted by Christchurch.

Heading into the BMW New Zealand Open hosted by Christchurch fresh from a tied 12that the star studded Australian PGA Championship presented by Coca-Cola, Kennedy opened his campaign with two birdies. 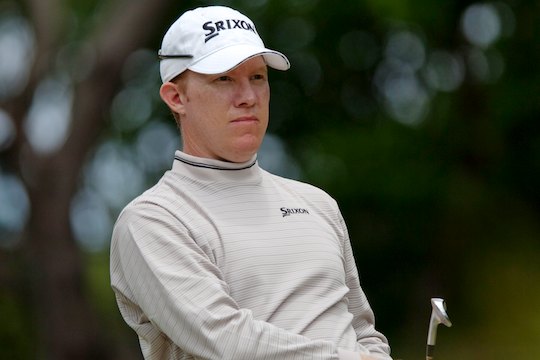 While off to a good start the 37-year-old Queenslander needed to keep his nerve as the wind started to pick up to make scoring conditions much tougher.

“I got it going early on when it was really calm and then when the wind picked up on my final few holes it was much tougher. The key to my round was just staying patient,” said Kennedy.

Having played the Clearwater course many times before Kennedy said it was his love of the wind and experience competing in tough conditions that helped him through.

“I have played here a few times and I enjoy playing in the wind, coming from Queensland and playing a lot in Asia I am used to these conditions so I am happy with my start.”

While Kennedy may have been content with the blustery conditions the same cannot be said for the afternoon field who found scoring tough.

The leading Kiwi Jim Cusdin, who tied with Kennedy in the afternoon, had a mixed performance on course with eight birdies, two bogeys and a double bogey, yet in the end walked off the course happy with his performance.

“I felt like I couldn’t do anything wrong early on, I was hitting good shots which gave me a lot of confidence but if you hit any bad shots today the wind just killed it,” said Cusdin.

“It was a tough day today, it was just grinding but it’s unlikely that you are going to go around and not hit a bad shot, it’s about how you control it, so I am happy with my end result on a day like this.”

The highlight of the day came late when Jason Scrivener aced the par 3 157 metre fourth hole but unfortunately this wasn’t enough to see him shoot to the top of the leaderboard, he finished his round at three-over.

Sitting behind the leaders is Leigh McKechnie and Doug Holloway at three-under and a further shot back sits Craig Parry, Mahal Pearce, Nicholas Cullen.

In addition to receiving their share of the AU$400,000 prize money, the tournament winner will also earn a place in the 2011 JBWere Masters and exemption onto the PGA Tour of Australasia for two years.

The leading amateur on Sunday afternoon will be the recipient of the Bledisloe Cup.

The BMW New Zealand Open hosted by Christchurch will be played at Clearwater Golf Club from December 1 to 4.

Tickets can be purchased through ticketdirect.co.nz or purchased on the gate. Christchurch residents that present their rates bill will be able to purchase two tickets for the price of one.