Australian Brad Kennedy has again flirted with victory on the Japanese Tour only to fall back over the closing holes at the Fujisankei Classic on Sunday.

The Gold Coaster had led the tournament after 36 holes but ultimately finished tied for 6th place, four shots behind Korea’s Min-Gyu Cho, after a closing round of four-over par 75. 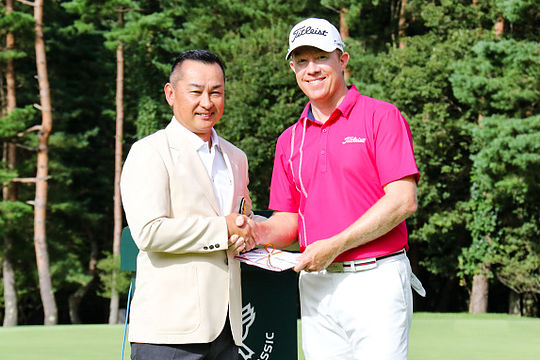 Brad Kennedy receives an award for the equal lowest round (65) of the week (Credit: JTGO)

After finishing joint second last week, Kennedy lost his chance for at least an outright second place finish with a double-bogey, bogey finish to his round.

His third consecutive top-ten finish in Japan sees him at 7th place on the Japan Tour money list, by far the leading Australian player in the rankings.

Kennedy will be looking to convert his recent good touch into a victory as the Japan Tour moves north to Hokkaido for the ANA Open this week.

Ryo Ishikawa, a man also in great form after a win and runner-up finish over the past fortnight, will defend his title at the ANA.