Kennedy makes it a double at New Zealand Open

After coming so close to victory in recent weeks, Brad Kennedy has now got the monkey well and truly off his back with a two-shot victory at the New Zealand Open.

The Queenslander posted an inspiring final round 8-under 63 to deny Lucas Herbert his second title of the year following a win at the Dubai Desert Classic in late January.

45-year-old Kennedy has endured heartbreaking back-to-back T3 results at the QLD Open and QLD PGA and was heading that way again coming into the final day with a two-stroke deficit.

However a slew of birdies from the 10th hole ensured he was well-placed as the final groups made their way back the clubhouse.

Herbert, who had flown in from the WGC event in Mexico last week, got to within one shot of clubhouse leader Kennedy but a pulled shot at the final hole left the Victorian with a costly bogey to add to a double at the 13th and Kennedy would hoist the Brodie Breeze trophy for the second time in his career. 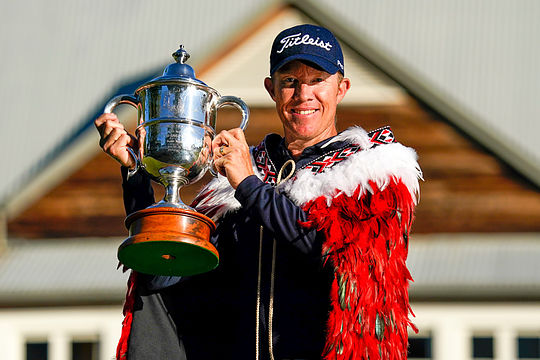 “I was gutted after the Queensland PGA, I actually didn’t want to play last week, I was that mentally destroyed by what happened. To do that today under that sort of pressure and overcome that, I’m just really proud of what I did today.”

“I think I was chasing today which put me in a really good mindset to continue to attack…I really just focussed on doing what I needed to do.”

“I’d always said 2020 was my last year. I’ve been playing 25 years on Tour and it was time to get home and spend some more time with my kids and wife.”

Kennedy’s resume has now expanded to 13 professional victories including five on the Australasian PGA Tour and thanks to the co-sanctioning of the event, his first Asian Tour victory.

Australian Nick Flanagan claimed third place, a further two shots back of Herbert, matching his finish at the Australian PGA Championship in December.

Australian Wade Ormsby and America’s Chan Kim finished tied for 7th on 14-under with New Zealand’s Kieran Muir and Japan’s Ryosuke Kinoshita rounding out the top 10, another shot back.

Co-overnight leader Joohyung Kim lost his way in the final round with four bogeys to finish in fourth place and one shot ahead of Kiwi duo Harry Bateman and Michael Hendry .

The Tour will return on April 30th for the PNG Open at Royal Port Moresby Golf Club.