Australian Brad Kennedy has cruised to victory at the Holden NZ PGA Championship at Remuera Golf Club in Auckland.

Starting the final round in a share of the lead, Kennedy teed off in the final group of the day alongside New Zealander Josh Geary and New South Welshman James Nitties. 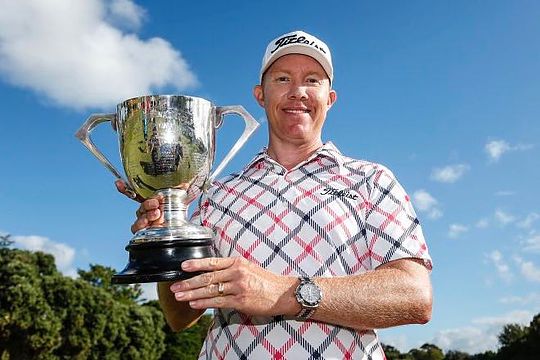 Opening with a birdie, Kennedy never looked back and sealed his victory with a birdie at the last to win with a tournament total of 22-under 266.

“It feels fantastic. I haven’t won since 2013, it’s been a great week and really glad I could do the double here in New Zealand.”

“It’s a great start for me this year, and I’ve got two months off before the Japan Tour starts. To win anywhere is just a great effort, there were some quality players here this week so to come over and win in New Zealand, it’s like my back yard now.”

“Obviously all the locals were gunning for Josh, and making lots of noise, but I just kept doing my own thing. Being over in Japan and being on tour for a long time now, you try to use that as a bit of an advantage, it was a great tussle out there.”

The crowd favourite, Josh Geary’s campaign unravelled at the 17th hole where a bogey dashed New Zealand’s hopes of a Kiwi winner. He’s finished in a share of runner-up and leading New Zealander for the second consecutive year.

Joining Geary in the runner up position was New South Welshman Neven Basic. Playing the group ahead of the eventual champion, Basic fired 6-under 66 for a tournament total of 20-under 268.

New Zealand’s second highest ranked player in the world, Ryan Fox gave the locals plenty to cheer about firing 7-under the card today to finish the tournament outright fourth on 19-under 269.

A further shot back and rounding out the top-5 on the leaderboard was another Kiwi Michael Hendry and James Nitties.

The PGA Tour of Australasia will now travel to Queenstown for the BMW ISPS New Zealand Open to be played at The Hills and Millbrook Resort from 10-13 March.