Kennedy stays ahead of storms with record 61

Brad Kennedy has stormed clear in round one of the Coca-Cola Queensland PGA Championship as wild weather disrupted play at Toowoomba.

Rain delayed play for more than two hours as a heavy deluge lashed City Golf Club just as the afternoon field took to the tees. 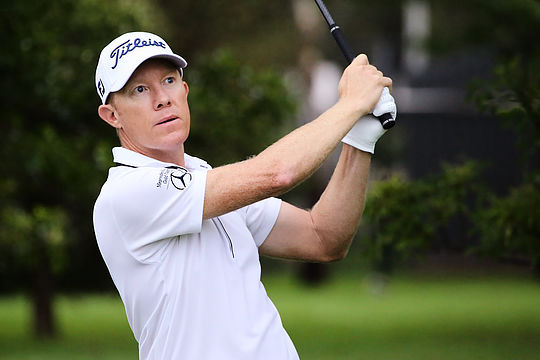 With the greens sodden, the players were pulled from the course at around 12:30pm and returned at 2:45pm.

Kennedy, who shot 9-under, got to the clubhouse moments before the weather took a turn.

The veteran fired a bogey-free 61 – an equal course record – which included three birdies to close his round.

“I hit off the tenth (hole) and had an ideal start with a two-putt birdie. I drove it really well today, which is the key around Toowoomba City Golf Club. You’ve got to hit the fairways, which gives you a lot of opportunity to hit the greens,” Kennedy said.

“I managed to hole a couple of nice putts. I made a massive 50-foot putt for birdie on the third hole after being in a tricky position in a bunker.

“It just continued some momentum I had from the back nine and finished with three birdies. It’s nice to finish that way when you are gaining momentum.”

With up to 45 players still to complete round one, round two tee times have been pushed back approximately 45 minutes tomorrow to cater the increased tee traffic.

Three-time European Tour winner Marcus Fraser and 2017 ISPS HANDA Vic Open champion Dimi Papadatos (both 5-under) are tied for second, while six players, including Warwick PGA Professional Samuel Eaves, are deadlocked at 4-under.