Phachara Khongwatmai has secured his breakthrough maiden win on the Asian Tour winning the US$1 million Laguna Phuket Championship at the Laguna Golf Phuket.

Khongwatmai, a six-time runner-up finisher on the Asian Tour, needed to dig deep holing a 4 metre par putt on the 18th hole to avoid a sudden-death play-off and beat countrymen Panuphol Pittayarat and Denwit Boriboonsub and Korean Bio Kim by a stroke. 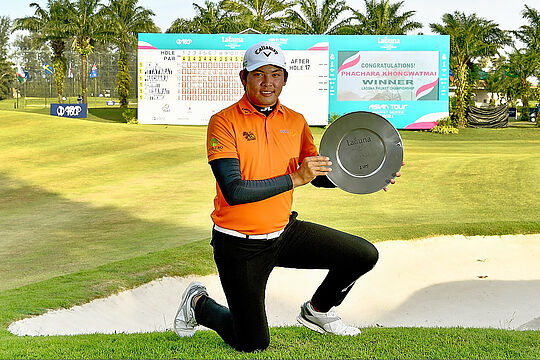 “I feel very happy, and very excited for this win,” said Khongwatmai. “I have been waiting for about six years. Right now, it is my time, and I feel great. Today was tough, and all about who can make the score.”

“That last putt is my last chance for 18 holes but if I missed I knew I had another chance in a play-off. But I had that putt from that place before when I was here in quarantine.”

Khongwatmai has won twice before on the Asian Development Tour, both in 2015, while it was back in 2013 he won the Singha Hua Hin Open as a 14 year old amateur to become the youngest winner of a professional tournament. He also qualified for the 2016 Open Championship by finishing sixth at the 2015 Thailand Golf Championship.

Scott Hend was the best of the Aussies, four shots back of Khongwatmai in a share of 10th, with Wade Ormsby a further shot adrift but maintaining top spot on the Order of Merit just in front of Khongwatmai.

The tournament was the second and final event of the Asian Tour Phuket Series. The Asian Tour heads next to Singapore in January, where two 2020-21 season-ending events are planned.