Korean In-Kyung Kim blistered the golf course in the final round to cap off a five-shot victory in the Ladies European Masters at Golf Club Hubbelrath in Dusseldorf, Germany.

One behind the overnight lead, the 28-year-old South Korean closed with the low round of the week, a bogey-free nine-under 63, to finish at 17-under par. Kim also won the title in 2014 when the event was staged at the Buckinghamshire Golf Club in England. 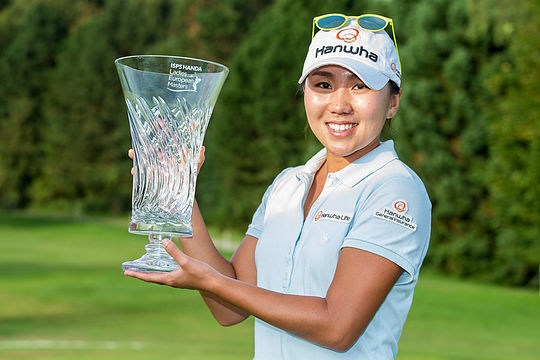 “It’s a totally different feeling because then we played in England and now we’re playing in Germany.” Kim said, “There is such a big Korean community in Germany because after the war a lot of people came for work and stayed here.”

“It means a lot to be the only Korean in the field, so I wanted to play well, but you cannot force golf; it’s four rounds.”

Spain’s Belen Mozo carded a final round 69 to take out second place outright and had the mixed fortunes of a hole-in-one on the 13th hole in the final round, only to learn the Omega watch on offer had already been claimed by Finland’s Noora Tamminen on the same hole earlier in the day.

WA’s Whitney Hillier was the best placed Australian tied for 28th place at 1-under, with Rebecca Artis (T31) and Sarah Kemp (T47) also in the money over the weekend.

The LET and LPGA now head to the final major on the women’s calendar, the Evian Championship in Evian Les Bains, France, where world number one Lydia Ko is the defending champion this week.

The Australian challenge will be taken up by Minjee Lee, former champion Karrie Webb, Su Oh and Sarah Jane Smith at the spectacular Evian Golf Club.