Grace Kim and Louis Dobbelaar have taken out the Australian Amateur titles at Kooyonga Golf Club in Adelaide.

Under a new championship format where the traditional match play has been replaced with four rounds of stoke play, Kim proved too strong for the women’s field and was the only player in the women’s field to finish under-par with a 3-under total. 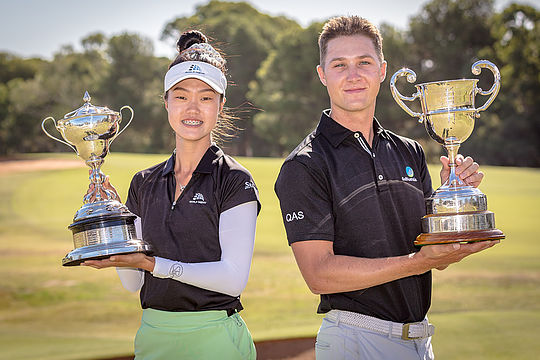 Having begun the final round two behind Rudgeley, Kim applied the pressure early with two birdies on the opening nine before carding five more birdies and just one bogey on the back nine to fire a closing 4-under-par 68.

“Australian Austateur Champion has a nice ring to it for sure,” said Kim. “I wasted a couple on the last, but still had enough to win, so I’m happy. I really, really like this place, the fact I was able to win on this golf course means a lot.”

The national women’s title adds to Kim’s state title she successfully defended at the NSW Amateur a few weeks back.

In the men’s division Queensland’s Louis Dobbelaar has claimed his maiden Australian Amateur crown, carding a two-under 70 to finish at 10-under and a two shot victory over Jeffrey Guan.

Overnight leader and local Jack Thompson, who was later disqualified for a scorecard error, had begun the second round with a five shot lead, however a final round of 81 opened the door for Dobbellaar to make his move. The national title adds to the New Zealand amateur title which Dobbellaar won in 2016.

“This is special. I don’t know if it has sunk in yet,” said Dobbelaar.

“I played some pretty good golf at times this week and I know how well Jack and others played, so I’m pretty excited to have my hands on the trophy.”

Michael Hanrahan Smith finished in outright third at 6-under, with Josh Greeg, Haydn Barron and Toby Walker rounding out the top-5.