Kim finished at 24-under-par to pocket US$1.440 million in official earnings and picked up 500 FedExCup points to move to third place in the season-long standings. It was Kim’s second PGA Tour victory adding to his Wyndham Championship title from August, and he became the first player since Tiger Woods in 1996 to win twice before turning 21.

Kim moves to 15th in the world rankings and is the highest-ranked Asian player in the world. A remarkable rise given Kim did not have PGA Tour status three months ago. Sunday’s victory was his second in just four outings on the PGA Tour.

“I’m having fun playing on the PGA Tour. It’s awesome,” said Kim. “It’s been crazy. Definitely doesn’t feel slow, that’s for sure. I’ve just got to keep going, and I’m enjoying the ride. So hopefully, many more to come.”

It wasn’t the first time that Kim got the better of Cantlay either. Just a fortnight ago, the Presidents Cup wildcard pick sunk a 10-foot birdie putt for a 1-up four-ball victory over Cantlay and Xander Schauffele with the post-putt celebration with partner Si Woo Kim going viral. 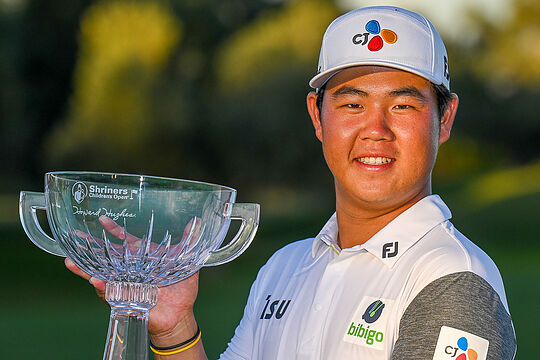 Kim turned professional at just 15 years of age and spent some time in Australia and in 2018 won the Philippine Amateur Open Championship and the W Express RVF Cup Amateur Championship.

Jason Day finished the best of the Australians in a share of 8th position, a closing 63 which included eight birdies in his last 10 holes, moving the 2015 PGA champion fifteen places up the leaderboard for his best result and second top-10 since the Farmers Insurance Open in January.

Lucas Herbert shared 20th position, with Cam Davis in equal 37th after dropping twenty-four places on Sunday with a final round 71. Harrison Endycott rounded out the Aussies making the weekend finishing in a share of 69th position.

The cut came in a 4-under with Ryan Ruffels missing the weekend finishing at 6 over par for two rounds.