South Korea’s Joohyung Kim has taken out the Singapore International overcoming Rattanon Wannasrichan in a playoff after the pair finished at 4-under-par.

In extra holes, Kim nailed a seven metre putt at the par-5 finishing hole with his opponent missing a chance to extend the playoff from two metres. 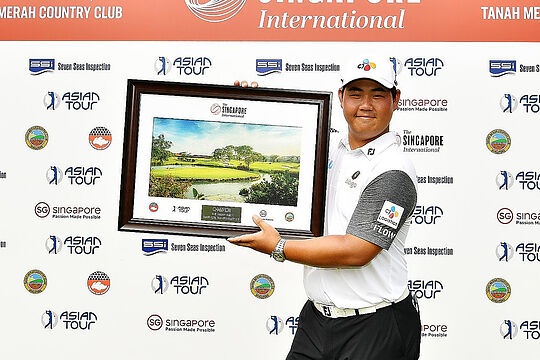 It was Kim’s second Asian Tour victory following his maiden win at the 2019 Panasonic Open.

“It’s a tough golf course, you know, all the players played their heart out, I’m just very lucky to be on top,” said Kim.

“It was a grind today. I think it was a lot harder than the first one, but definitely glad I finished on top.”

Ormsby had a solid week finishing in a share of 8th position but is not scheduled to compete in the Asian season ender. He will instead be teeing it up in the DP World Tour’s Abu Dhabi HSBC Championship.

Thailand’s amateur star Ratchanon Chantananuwat, aged just 14 years old, was in contention for much of the day, making it a battle of the teenagers, and took sole possession of third when he returned a 69 to finish two shots shy of the play-off.

At the event held at Tanah Merah Country Club, Chantananuwat was only one of three players to finish under par at the event. The highlight of his week was a 66 in the second round.

He is currently ranked at 107 in the World Amateur Golf Rankings and is also entered in this week’s SMBC Singapore Open at Sentosa Golf Club.