Joohyung Kim’s victory at the Wyndham Championship has seen the 20-year-old secure not only a place in the FedExCup Playoffs, but instant PGA Tour status after he fired an impressive 9-under-par 61 on Sunday to secure a five stroke win in the season-finale event at Sedgefield Country Club.

Kim finished at 20-under for the tournament with fellow South Korean In Sung-jae and American John Huh in a share of second position.

“I can’t believe it – I’m speechless right now. I’ve worked really had to get to this point. Just walking off that 18th green, just thinking about the behind the scenes work. It was a hard day but obviously worth it.”

Kim became the second-youngest player behind Jordan Spieth to win a PGA Tour tournament since World War II. He is also the first player to win a tournament on this circuit after starting with a quadruple bogey on the first hole since the PGA started collecting these statistics in 1983. In just three starts since joining the Tour on a special exemption in mid-July, Kim has made three cuts and clinched a pair of top-10 finishes, including Sunday’s win at the Wyndham Championship.

Jordan Spieth was 19 at the time of his victory at the John Deere Classic. Kim also became the first non-member to win since Collin Morikawa at the 2019 Barracuda Championship and the first man born in the 2000s to win on the PGA Tour.

Cameron Percy finished the best of the Australians in a share of 8th position, with Brett Drewitt in a share of 61st position. Adam Scott rounded out the Aussies to make the weekend, finishing in a share of 76th. Aaron Baddeley missed the cut while Jason Day was forced out after just 18 holes due to “illness”. 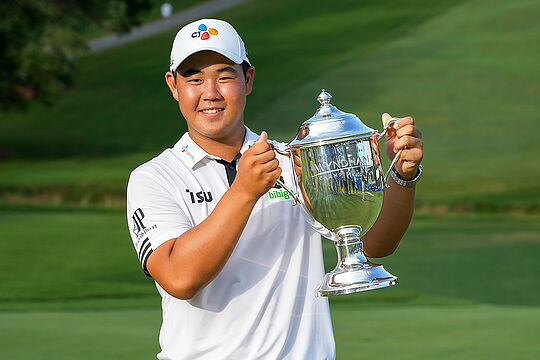 The North Carolina event was the last contest on the PGA Tour regular season, and the top 125 golfers now move on to the FedExCup Playoffs.

The first event is the FedEx St. Jude Championship at TPC Southward in Tennessee. After that, 70 players will make the next cut-off and advance to the BMW Championship at Wilmington Country Club in Delaware.

Cameron Smith is the highest ranked Aussie at No. 2 in the standings entering into playoffs. Lucas Herbert, Marc Leishman, Cam Davis, Adam Scott, and Jason Day all made the top-125.