Kim finished at 11-under-par to earn US$300,000 for her fifth LPGA Tour title. Included in that total is a major championship, the 2014 Evian Championship, which she won as a non-member before her official rookie year in 2015.

The 26-year old Kim enjoyed a three-stroke lead after both the second and third rounds and held off a final-round push from Shibuno to claim the title. Kim’s lead was two with eight holes to play but Kim’s bogey on the par-4 17th cut the margin to one shot going into the final hole, the par-5 18th. 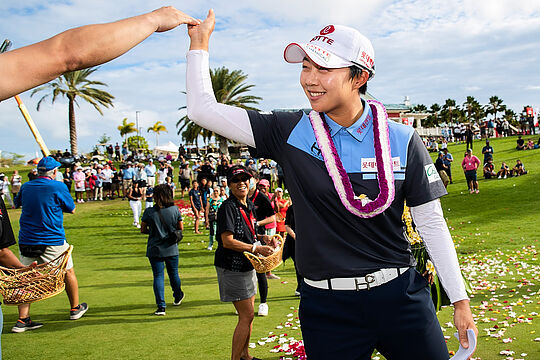 Kim made birdie while Shibuno could only manage a par.

LPGA rookie Stephanie Kyriacou and Sarah Kemp finished the best of the Australians in a share of 26th position at even par. Su Oh shared 48th position along with Hannah Green.

Kemp earlier had a share of second position after opening with rounds of 68-69 before a third round 78 hurt her chances and she closed with a 73. Green also opened strongly to take the first round lead with a 66 but closed with rounds of 76-75-74.

Karis Davidson making her first appearance as a full LPGA Tour member missed the cut after opening with 76-74.

The LPGA Tour moves back to the mainland American next week for the Dio Implant LA Open at Wilshire Country Club in Los Angeles.