Australia’s Grace Kim and Japan’s Keita Nakajima lead the Australian Master of the Amateurs following the third round on the West Course The Royal Melbourne Golf Club.

Kim fired rounds of 72-73-73 to be at 1-over-par for a two stroke lead over fellow Australians Julienne Soo and Stephanie Kyriacou who are at three-over-par moving into tomorrow’s final round.

Kim was out in 2-under at the turn moving into the back nine in style with a birdie on the 12th before a double bogey on the 13th halted her momentum momentarily.

“It’s great to be in a position to challenge for this title,” said Kim.

“Today I was able get off to a good start before some trouble on the 13th, but I was able to hold it together coming in. Overall, I thought I played well given the conditions and are looking forward to tomorrow.”

Kim then held it together over the closing tough holes to have the third round clubhouse lead. 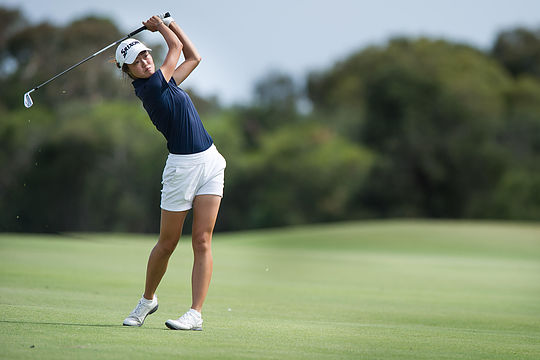 Overnight leader Becky Kay fired a third round 78 to drop three places to be at 6-over-par, four behind the leader.

In the men’s championship Japan”s Nakajima has held the lead since Tuesday’s opening round with scores of 66-74-70 to be at 6-under-par and is two ahead of a pack of three with world number 1 Americans Justin Suh, Matthew Wolff and Australian Andre Lautee.

“Today, I played well and I am full of confidence heading into the final round. I fell I can take advantage with the par 5′s and then I need to keep my score on the harder holes. Tomorrow will be a great day.”

With three rounds completed, these championships remain wide open. Three players in the women’s championship can take the title out and in the men’s six players are within three of the leader. It will make for an interesting final day.

There are scores to be had on Royal Melbourne’s West Course as shown by Australia’s Kyle Michel with his third round 7-under 65 to move him 34 places up the leaderboard. Suh also fired an impressive 66 to move into contention to be only two behind Nakajima and within striking distance in tomorrow’s final round.

Australian Isabelle Taylor and Charley Jacobs fired the women’s low round with a 71.