For Kim the victory was her second title in as many years and the Avondale member proved too strong for Concord’s Belinda Ji, winning the 36 hole final 7&6. 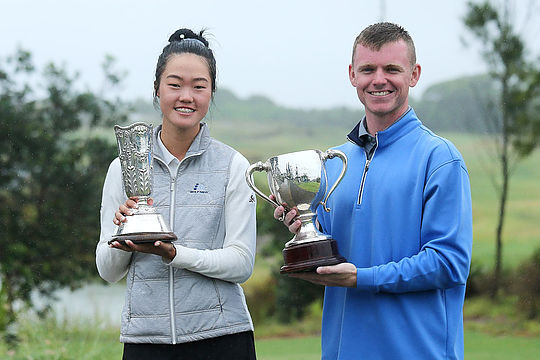 Kim becomes the first back-to-back champion since Sarah Oh in 2005-06.

“I mean the past two days have been quite brutal, it took some getting used to,” said Kim. “To claim this title again feels huge for me.”

Kim was fast out of the block during the morning eighteen holes getting to 7-up before Ji grabbed a much needed hole on the 21st. The pair then swapped a few holes, however, when Kim took the 27th and 28th to get back to 7-up, the margin would prove too difficult for Ji to overcome.

In the men’s event, Richards secured his biggest win to date accounting for medallist and top-seed Jeffrey Guan, 4&3, playing the last 12 holes of the final in even par golf under exceptionally challenging conditions as strong wind and rain last the Magenta Shores layout.

Earlier the pair were inseparable after 18 holes with Richards holding a hole up advantage moving into the afternoon play having previously been 4-up after 11 holes.

“I was quietly confident,” said Richards. “I’ve been playing well, and match play is a huge strength of mine. I played great the first 14 holes andI knew when I got the lead back (the second time) I couldn’t lose it again.”

The win gives Richards a start at the NSW Open with Guan already granted a tee-time with his joint win at the NSW Junior Championship last month.

Earlier, Richards defeated Thomas Heaton, 3&1, in the semi-final after Heaton accounted for Jy Pickin 3&1 in the quarter-final, with Guan overcoming former professional Chris Campbell 2-up after Campbell won his match against Riley Millers from Avondale.

Kelsey Bennett took medallist honours in the women’s championship finishing at 4-under-par with Grace Kim in a share of second with Claire Shin at even par.

Despite the limitations on international and interstate travel due to COVID, the field size was strong and full credit should be given to Golf NSW at time when many of our elite players are in dire need of competition play.