As is often the case this season international players have battled for an Australian amateur tournament and last week was no different at the NSW Amateur Championships with England’s Ben Schmidt and Callan Farr meeting each other in the Men’s final at St Michael’s Golf Club in Sydney.

Schmidt, whose best world amateur ranking has been 6th, was simply too strong against fellow countryman Farr, winning the championship with an impressive 7&5 victory. 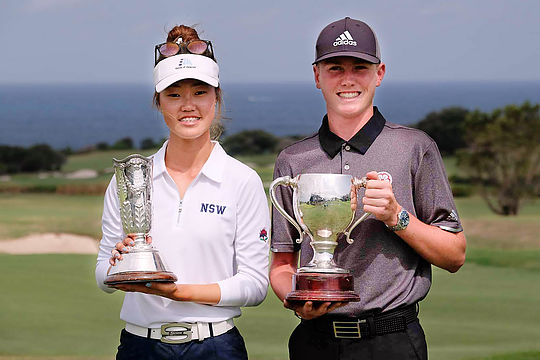 “I hit some great golf shots and didn’t make many mistakes, and the result shows what happened out there,” said the 17-year-old Schmidt.

“You’ve got to hit it in the right places.”

Schmidt played the Australian Master of the Amateurs, Australia’s highest ranked amateur event, as his first tournament for the year at Victoria Golf Club in Melbourne and despite jet lag and coming off an extended break secured a top-10 finish. Each tournament in Australia, Schmidt has improved and his win last Friday comes off an brilliant 2019 season.

“It’s taken me some time to adjust to the courses and get used to the greens. Overall, its been a fantastic experience for me and I’ve enjoyed every minute of my time here in Australia.”

Schmidt certainly brought plenty of form to Australia. In 2019 he became just the fourth player in history to win the English Men’s Open Amateur Stroke Play Championship (Brabazon Trophy) and its boys’ equivalent, the Carris Trophy, in the same year.

And if that wasn’t enough, he flew out to Portugal and finished 15 shots clear at the Justin Rose Junior Golf Championship. Schmidt has been helped along the way by his coach, Frank Houlgate and plays out of the Rotherham Golf Club east of Manchester.

Schmidt is attempting to follow in the footsteps of another Rotherham Golf Club member, 2016 Masters Champion and 2019 BMW PGA Championship winner Danny Willett.

Grace Kim secured the NSW Women’s Amateur Championship with a 3&2 win over Kelsey Bennett. The final was an evenly contested affair but Kim took control early in the afternoon session of the 36 hole final, moving to a two-hole lead after the 20th.

Bennett, a member of St Michael’s, took advantage of her local knowledge to keep in the final but wins on the 30th and 31st holes by Kim would make things difficult.

On the 34th hole, the tough dogleg 16th par 4 at St Michael’s, Kim had moved to a three up lead with three to play.

After both players hit the green, Kim had her chance to make birdie with a long range 3 metre putt for birdie but missed and left Bennett with her chance to keep the contest alive.

Bennett gave her birdie putt a great roll to stay alive but was not able to convert and with it the match was Kim’s.