The US$750,000 event, which was co-sanctioned by the Ladies European Tour and Asian Tour, saw a Modified Stableford being used with points based on the number of strokes taken at each hole with albatross 8 points, eagle 5 points, birdie 2 points, par 0 points, bogey -1 point, double bogey or more -3 points. 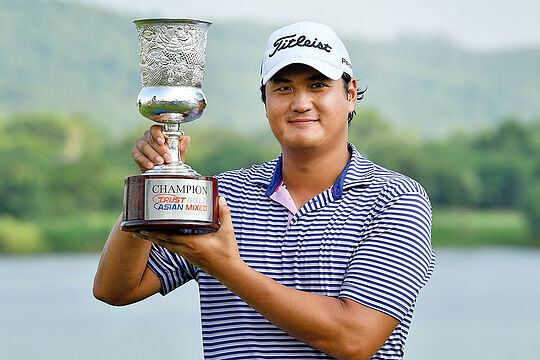 Kim came out on top scoring 49 points to claim the inaugural title and finished two points ahead of Sweden’s Maja Stark, who was the best-placed female.

“My putting has just been phenomenal, that’s pretty much what got me through it,” said Kim.

The 33-year-old has been in fine form winning his maiden Asian Tour victory last month at Hua Hin Thailand having not won a title since turning professional in 2011. Sihwan had shown huge promise as a youngster and followed in the footsteps of Tiger Woods, David Duval and Hunter Mahan by winning the US Junior Amateur Championship in 2004.

Kim has played mainly on the European Tour with his best result a third place at the 2018 Indian Open.

Australian Andrew Dodt secured a top-10 result on 38 points with Travis Smyth (T11) and Todd Sinnott (16) the next best of the Aussies.

The Ladies European Tour now heads to Australia for back-to-back events co-sanctioned with the WPGA Tour of Australasia, starting with the Women’s Australian Classic – Bonville on Thursday.