Kim, who also won the 2017 Players Championship and the 2016 Wyndham Championship, overcame a fast finishing Pat Cantlay to finish at 23-under-par for a one shot victory over the American.

Aussie Cameron Davis took outright third position two shots behind the winner at 20-under-par. It was Davis’ best result so far on the PGA Tour with his closing 64 elevating the former Australian Amateur and Open champion up the leaderboard.

Cantlay, 28 and a former World No.1 ranked amateur, made 11 birdies in the final round, including six in eight holes on the front nine. Cantlay finished his spectacular round with a 20 metre birdie putt on the 18th, to polish off one of the finest closing rounds so far this season.

Kim to his credit also finished with two birdies on the final three holes to ensure his victory under the pressure.

“I had to know what’s going on, so I knew how to play my game in the final round,” said Kim through a translator.

“I knew Cantlay played really well. I tried to keep patient and believe in myself. I got the chance on 16 and 17, and that’s when I could make it. I feel good about myself.” 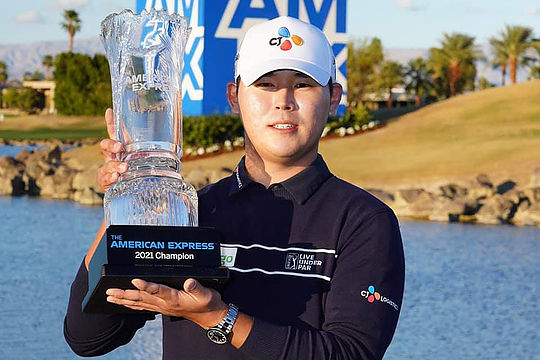 Davis has made the cut from 6 of 7 starts so far this season and Sunday’s third place result is his 4th top-ten finish from 57 starts on the PGA Tour.

Davis now moves to 38th on the moneylist having finished inside the top-25 on five occasions this season.

“I’ve been trending in a good direction for a while now,” remarked Davis.

“I’ve had some good performances, it’s just putting the full four rounds together rather than just having a good one on Sunday or just the weekend…so I think the learning curve here is just see what I did this weekend and keep that sort of stuff going and it should lead to something good.”

Matt Jones was the next best Aussie finishing in a share of 21st position, a closing 72 unfortunately moving him down the leaderboard eight positions. Rhein Gibson finished in a share of 40th position at 8-under to be the last of the Australians to make the weekend.