Kyung-Tae Kim of Korea won his fourth Japan Golf Tour title of the year when he claimed a three-shot victory at the Asia-Pacific Open Mitsubishi Diamond Cup on Sunday.

The 29-year-old birdied the final hole for a two-under-par 68 for a winning total of nine-under-par 271 to further extend his impressive return to prominence in world golf. 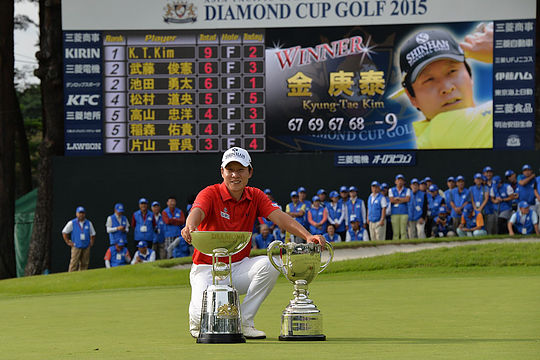 Japan’s Toshinori Muto and Yuta Ikeda posted 67 and 69 respectively to tie for second place while Michio Matsumura finished a further shot back on 275.

Kim, who led by two shots at the start of the round, was caught by a fast charging Muto after 12 holes but the Korean birdied the par three 13th hole to immediately regain control and sealed victory with a closing birdie from ten feet at the last hole.

“It doesn’t matter if you are leading by a few shots. It can easily be erased so I kept to my pace. It was never going to be an easy win and it wasn’t. I didn’t see the leaderboard until the 13th hole and that’s when I saw that I was tied for the lead,” said Kim.

“On the 18th hole, I knew that Toshinori (Muto) and Yuta (Ikeda) were two shots behind and they could eagle the hole. I wanted to get a birdie there and I did. I wasn’t aware of what my playing partners did so I only knew that I won until the very end. I was nervous!” he laughed.

The victory was especially sweet for Kim, who won this event in 2010 for his first title in Japan before it was co-sanctioned with the Asian Tour.

“I didn’t expect to win so many titles this year. I haven’t won in three years before this season started so I was hoping to win at least one tournament. I’ve come this far now and I’m really happy.”

Australian Scott Strange missed an opportunity to contend on the final day by shooting a final round 74 to slip back into a large group tied for 17th at even par, which included Brendan Jones and Scott Barr.

This week’s event on the Japan Golf Tour is the Tokai Classic staged at its long-time home, the Miyoshi Country Club in the Aichi Prefecture.