Michael Kim shot a final-round 66 on Sunday to win the John Deere Classic by a record-setting eight strokes.

Kim, who turned 25 on Saturday and has missed his last three cuts in a row, finished at 27-under to break Steve Stricker’s tournament record from 2010 by one shot and in the process secured a start at this week’s Open Championship.

Kim, who previously had just one top-10 finish in 84 career starts on the PGA Tour started the final day with a five stroke lead and never looked back enroute to his maiden tour win. Kim’s best finish before Sunday was a third at the Safeway Open two years ago.

Sunday’s victory was the breakthrough Kim was after since turning professional in December 2013. He was a member of the 2011 “Collegiate Group” that included Jordan Spieth, Justin Thomas, Daniel Berger and Alexander Schauffele, who have launched their professional careers with majors, FedExCup wins, Presidents and Ryder Cup appearances and Rookie of the Year honours. 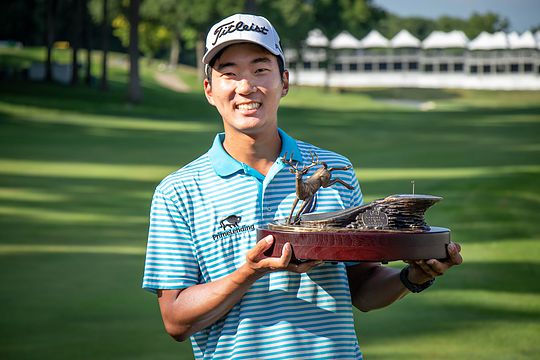 “To be able to finish out in style like this, it means a lot,” said Kim, who nearly quadrupled his season earnings with a winner’s share of US$1.044 million.

“You can’t help but feel you’re getting left behind, but this win says a lot and even the last couple of weeks, I felt like my game was getting there. I just felt like I needed just a couple of good starts to the rounds.”

A product of the University of California in April 2013, Kim was Pac-12 Men’s Golfer of the Month and recipient of the 2013 Jack Nicklaus Award.

He had limited status on the 2014 Web.com Tour after finishing T-56 at the Web.com Tour Qualifying Tournament.

Whilst Kim secured Sunday’s win easily, it left Bronson Burgoon, Francesco Molinari, Joel Dahmen and Sam Ryder to battle for the runner-up spot where they all finished at 19-under-par.

John Senden finished in a tie for 34th position at 11-under and earned his best finish of the season having made his fourth cut in six starts. Stuart Appleby was the last of the Aussies to make the weekend finishing in a tie for 50th.