An incredible finish to the tournament has seen young Korean Sei Young Kim defeat world number three Inbee Park in a playoff at the LOTTE Championship in Hawaii.

Not satisfied with having chipped in on the 18th hole to make the playoff in the first place, Kim outrageously holed her second shot with an 8-iron on the first playoff hole to defeat a stunned Park. 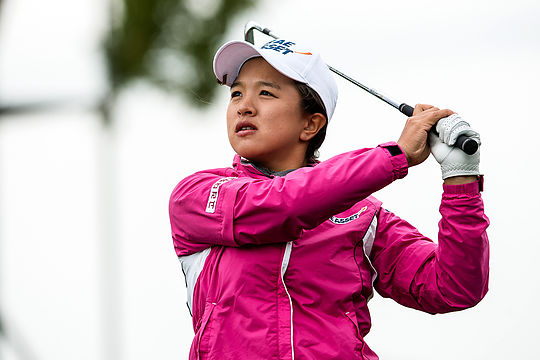 The victory gives Kim her second LPGA title in her rookie year on Tour, after also winning in a playoff in The Bahamas in February.

“I don’t know what happened today,” Kim said with a huge smile following her finish. “There was 140 metres, so I think about between 7 or 8. And so I chose 8 normal, and it was good choice.”

Playing first in the playoff, Kim’s approach took two hops on the green before the ball disappearing from sight, the crowd reaction telling her the ball had gone in.

When Park was not able to follow suit, Kim had a joyous walk to the green while accepting the adulation of the gallery.

“Today, I didn’t see it coming,” Kim admitted through her interpreter.

“I don’t know what I’ve done again to deserve this, but I feel like every time I win a tournament, I have to do something crazy (Kim had a hole-in-one in 2013 to win the richest event on the Korean LPGA Tour) an event or overcome some type of obstacles.”

“I don’t know why it keeps happening, but it feels good.”

Kim got into the playoff after finding the water with her drive on the 18th before chipping in for par from 18-feet to tie Park at 11-under 277.

“On the 18th when I hit my hybrid I thought there was no way that it would fall into the hazard. I thought it would come short,” Kim said, “When it happened, I just tried to get myself under control because something crazy just happened to me.”

“I thought maybe something crazy will happen again, so I tried to get myself under control and calm myself, and look what happened.“

“Obviously able to chip in and hole out from there, she’s a good player,” the vanquished Park said. “She’s already won twice this year and she has definitely proven herself that she can compete out here. She’s a great player, I think she’s a great fighter.”

I.K. Kim finished in third at 9-under after bogeys on 17 and 18 to fall out of the title race, while Hyo Joo Kim and Chella Choi rounded out an all-Korean top five at 7-under par.

Defending champion and local hope Michelle Wie recorded her best result of the season with a tie for 11th, a shot ahead of Minjee Lee (T13) who was the only Australian to make the cut.