Marcus Kinhult holed the most important putt of his pro career in birdieing the 72nd hole to break a four-way log-jam atop of the leaderboard and capture the Betfred British Masters at Hillside. 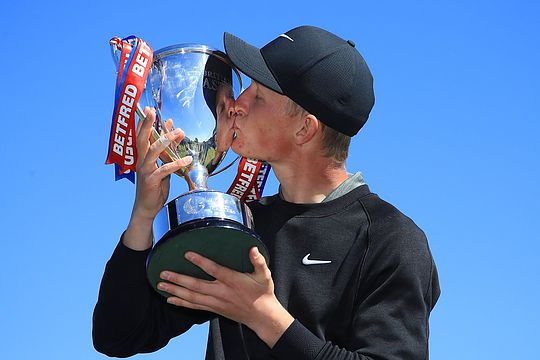 In fact, the Swede birdied the final two holes after dropping two strokes on the previous two holes, to finish one ahead of Pepperell, Wallace and Scotland’s MacIntyre, who was chasing his first victory on just his 14th European Tour start.

“I’ve been dreaming about it for such a long time and to finally do it is amazing. My knees were shaking on that final putt. My hands were shaking. Everything was shaking. It’s hard to remember now. Just so much nerves and so much willpower I guess. It’s a cool feeling,” said Kinhult.

“It was tough. I just tried to stay patient, composed and somehow I made those two last birdies. It is great. This is a very prestigious event and a nice little trophy to have. To get it as my first win is special.”

There was a four-way tie on 15 under par when Kinhult and Wallace stood on the 18th tee, but Kinhult converted a birdie putt from eight feet to claim his maiden title, becoming the third Swedish winner of the British Masters after Alex Noren in 2016 and Johan Edfors in 2006.

MacIntyre looked to have dropped out of contention after a double bogey on the par five second hole, but he pulled a shot back on the fourth hole and then played the back nine in five under par to race up the leaderboard.

Pepperell, defending the title he won at Walton Heath in October, carded a final round six under par 66, while Wallace, who shared the 54-hole lead with Kinhult, signed for a one under par round to join him and MacIntyre in second place.

Scot Richie Ramsay took fifth place on 12-under par after a level par round 72, with English pair Jordan Smith and Paul Waring sharing sixth on 11 under.

Scott Hend and Lucas Herbert shared 35th at 5-under with Jason Scrivener finishing well down the board at T58.