Katherine Kirk has won the inaugural Thornberry Creek LPGA Classic in Wisconsin, finishing at 22-under to earn her third career LPGA win and a chance to play in the upcoming Women’s US Open.

Kirk’s last LPGA title was in 2010, 152 starts prior, and she entered the final Sunday round with a four-shot lead and needed to dig deep to close out her victory. During the closing holes Kirk bogeyed the 17th to drop to 21-under and just a one shot lead.

South Africa’s Ashleigh Bahai finished at 21-under which put Kirk in the position of needing a par or better to avoid a playoff.

Kirk rolled in an 4 metre birdie putt on the 18th, avoiding a potential playoff with Buhai, who put her approach shot within three feet of the cup. 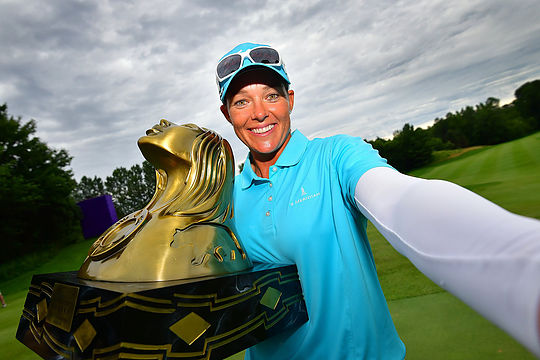 “It’s just a great feeling and taken so much hard work and patience,” said Kirk whose final round mixed six birdies with four bogeys.

“I had a rough year, well, two of them in 2015 and 2016. When you are in that position and you’ve had success before it does go through your mind that maybe I don’t have what it takes to be competitive out here anymore.”

“Winning is hard and a lot harder than when I first did it (at the 2008 Canadian Open) with so much talent out here now.”

The win also earns Kirk a start in the US Women’s Open starting at Trump National Golf Club in New Jersey from Thursday.

Kim Sei Young of South Korea finished third at 268 after a final-round 63. Pornanong Phatlum of Thailand shot the best round of the week with a 62 and took fourth spot at 269. Cristie Kerr rounded out the top five at 270 after a closing 66.

Minjee Lee was the next best Australian finishing in a tie for 20th at 13-under with Karrie Webb in 75th position at 1-under.