Twelve months earlier, Kisner had lost 7&6 to Bubba Watson, but this year made sure the victory would be his.

Kisner, who ended the 10-match winning run of Open champion Francesco Molinari in the semi-finals, beat Kuchar 3&2 to win his third PGA Tour title and the biggest of his career.

The 35-year-old was never behind in the final but saved the best until last with a birdie on the par-five 16th to seal victory after Kuchar had left his eagle attempt from 10 metres just short.

“I’m relieved,” said Kisner after his victory. “It’s a long week, I played great and did the things I needed to do to win and that’s what you have to do in match play. I’m glad to come back after my performance last year and do a little better.”

Kisner never trailed against Kuchar, though it was tight at the turn until Kuchar made too many mistakes. He missed a 4 metre on the 10th that would have tied the match, and on his next swing put his tee shot into the water on the par-3 11th.

Kisner moved to a 2-up lead and never looked back. He halved holes by making putts from two metres and 1 metre, before taking control on the 15th when Kuchar’s chip was too strong and led to another lost hole. 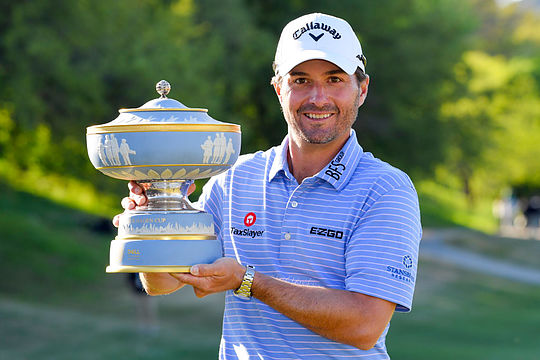 The second straight All-American final resulted in a sixth consecutive US victory in the World Golf Championships.

Kuchar, who won Match Play in 2013, had to beat Lucas Bjerregaard in the semifinals in another match that went the whole way.

Bjerregaard, who accounted for Tiger Woods in the quarterfinals with clutch shots down the stretch, made a 2 metre putt on the 17th to stay alive, but he couldn’t come up with the birdie he needed on the 18th.

Marc Leishman was the best Aussie performer falling to South African, Louis Oosthuizen, 2&1, in their round of 16 encounter. Oosthuizen, though, would go on the lose to Kisner in the afternoon quarter finals.

Earlier, Jason Day lost to Phil Mickelson, 2-down, in the third round, with Cameron Smith losing to Paul Casey 4&3, seeing the Aussies not securing enough wins to progress to the round of 16.

The match of the tournament arguably was the Tiger Woods and Rory McIIroy encounter with Woods collecting an impressive 2&1 win. The 80-time PGA Tour winner produced a number of ‘Tiger specials’ during the match, no more so than his 2 metre putt on the 17th for the win.