American Kevin Kisner is no stranger to having the lead at a major. Just last year he held or shared the top of the leaderboard through 54 holes at the PGA Championship before losing to Justin Thomas as he fell away in the final round.

Today, the 34-year-old took full advantage of the benign weather conditions to post a 5-under 66 at Carnoustie Golf Links for a one shot lead over a trio of players including South Africans Erik Van Rooyen, Zander Lombard and America’s Tony Finau.

“I holed a long putt on six for eagle and that was kind of the theme of the day,” said Kisner.

“I putted so badly at Greenbrier, so I’ve been working really hard on it since I got here. The ball started coming off on line and when that happens, I think I can hole every putt.” 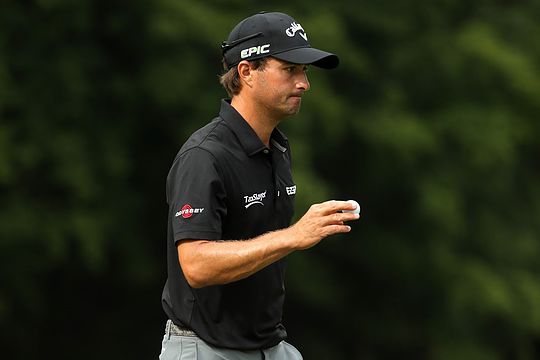 Three-time Open Champion, Tiger Woods, overcame a neck injury and using his driver just once to end his three-year Open Championship absence with a level par 71.

Woods got off to a brilliant start birdieing the first and fourth holes to race to two-under but let slip the chance to go three-under at the par-5 sixth hole before making the turn at two-under.

The 14-time Major winner dropped a shot after finding a fairway bunker on 10 but bounced back with a birdie on 11 before bogeying the 13th and 15th in the increasingly windly late afternoon conditions.

Woods posted three solid closing pars to end the round sharing 32nd place and only five shots behind Kisner.

“I think it played a little on the quick side out there this afternoon, the balls were definitely rolling and I thought I played a pretty solid round and unfortunately I didn’t take care of both par 5s,” he said.

2017 champion Jordan Spieth was looking solid at 3-under through 11 holes before giving back four shots on his way to the clubhouse.

“The 15th hole is actually one of the easier holes on the golf course – I made double.”

“I picked the wrong club on the second and it plugged into the face of a pot bunker. That 15th hole really hurt.”

Cameron Davis, Adam Scott and Jason Day were the best of the Australians in a tie for 32nd place at even par. Davis enjoyed a better round than the figures indicate with two double-bogeys marring an otherwise solid day.

Marc Leishman sits at 1-over and equal 50th, Lucas Herbert and Cameron Smith share equal 72nd while Brett Rumford (T90) and Matt Jones (T110) will have some work to do to make it to the weekend.