Adam Scott has narrowly missed claiming another PGA Tour title after being eliminated in a six-man playoff at the Wyndham Championship.

Scott missed a short putt to claim what would have been his 15th PGA Tour title on the first playoff hole to leave the door open for American Kevin Kisner.

Earlier Scott had fired a closing round 65 to finish at 15-under along with Kisner, Kevin Na, Branden Grace, Si Woo Kim and Roger Sloan.

Following Scott’s miss, all six players went back to the 18th tee before Kisner stiffed his approach shot on the closing par 5 hole to set up the thrilling victory.

It was the first time Scott has lost in a playoff on the PGA Tour with his most notable playoff victory coming at the 2013 Masters. Scott’s single PGA Tour win since 2016 came at the 2020 Genesis Invitational.

Kisner moved up 40 spots to 29th in the FedExCup standings with the FedExCup Playoffs set to begin at The Northern Trust this Thursday. Kisner began the final round four shots off the lead only to card an impressive 66 after making birdies on the 16th and 17th to reach the playoff.

“My first playoff win,”said Kisner, who had been 0-5 in playoffs.

“To be standing here is pretty sweet. To be honest, coming down with three or four holes to go, I really didn’t think I had a chance to win. It’s a crazy way to break the no-wins-in-playoff streak, but it was a fun week, awesome week put on by everyone here in Greensboro.” 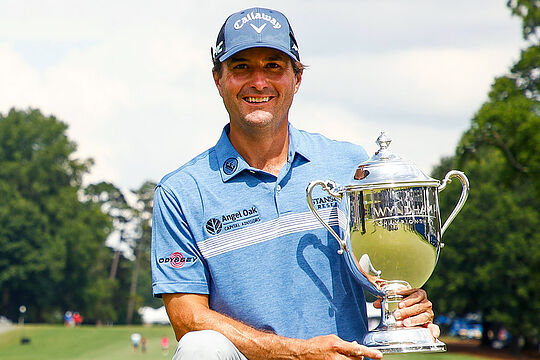 It was the third six-man playoff on the PGA Tour and the first since Robert Allenby won at Riviera in 2001. The Victorian defeated Brandel Chamblee, Dennis Paulson, Jeff Sluman, Bob Tway and Toshi Izawa at the-then Nissan Open.

The 37-year-old Kisner now has four PGA Tour wins including the RSM Classic in 2015, Dean & DeLuca Invitational in 2017 and the WGC-Dell Technologies Match Play in 2019.

The top-70 players will advance to the BMW Championship to be held at Caves Valley Golf Club in Maryland outside Baltimore.