American Kurt Kitayama had six birdies and an eagle to salvage a 1-under 71 in the weather-delayed third round in the morning, and then birdied two of the last three holes in the afternoon for a 70 and a one-shot victory in the Oman Open.

Kitayama carded a final round 70 for a seven-under-par total at Al Mouj Golf to finish one shot ahead of the quartet of Spain’s Jorge Campillo, France’s Clement Sordet, Germany’s Maximilian Kieffer and Paraguay’s Fabrizio Zanotti. 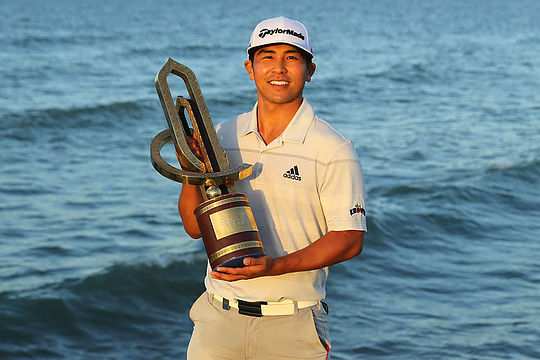 The 26-year-old won for the second time this season on the European Tour.

“It feels great to win,” said Kitayama who also won the Mauritius Open last year. “My comeback this morning helped set up this final round. I was back in contention and with it being continuous rounds it helped me cruise into the next one.”

Kitayama was a single shot off the lead after 36 holes of the weather-delayed event with high winds and sand storms but started his third round with a quadruple bogey eight and dropped further shots on the second and third before darkness ended proceedings on day three on Saturday.

He then headed into a marathon 33 holes on Sunday, seven shots off the lead, before mounting his challenge as others faulted.

Deyen Lawson was the best of the Australians finishing in a share of 27th position at 2-over. Nick Cullen and Scott Hend finished a shot further back in a share of 31st position.

Americans now have won six of the 12 official events on the European Tour this year with Kitayama and Dustin Johnson (Saudi International, Mexico Championship) having two victories each. Bryson DeChambeau (Dubai Desert Classic) and David Lipsky (Alfred Dunhill Championship) were the other winners.