They say a change is as good as a holiday and for New Zealand’s Steve Alker a move to the Champions Tour has certainly paid off after securing his first win at the TimberTech Championship.

Alker, who has spent the last twenty years plying his trade between the Korn Ferry and PGA Tours along with stints in Europe and Australia, turned 50 in July and decided to try his hand on the seniors tour. His initial thoughts were to Monday Qualify but a T7 in his first event, the Boeing Classic in late August, got him another start a week later. 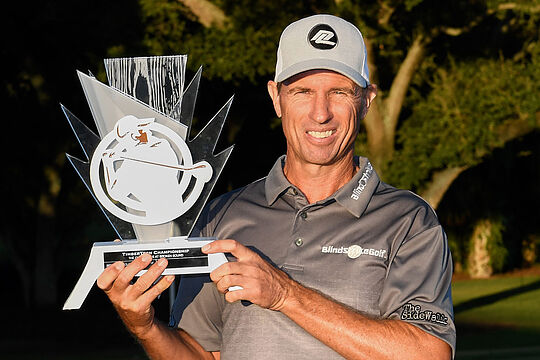 “It’s just been building. I’ve been having chances. You have a bunch of top-10’s and you get in the thick of it and just try to get a W. Not that the top-10’s aren’t any good, it’s just that you get that win, and just glad I got one today,” said Alker.

The father of two took home $305,000 for his victory, which takes his nine-tournament haul to almost $900,000 in just a few months and eclipses the total money he earned across several seasons on the PGA Tour.

“I was targeting [Champions] Tour School and I thought if I could come out and do Mondays and try to qualify and get some events under my belt, that’d be great. To be standing here with a win, it’s amazing.”

Miguel Angel Jiménez racked up another second place finish this week alongside Jim Furyk on 15-under with Ernie Els and Tim Petrovic three shots further back in 4th place.

Stephen Leaney ended his season in equal 36th which saw him drop from 45th to 48th place on the points board.