Danny Lee has become the first New Zealander to win a US PGA Tour title since Michael Campbell claimed the US Open title 10 years ago. Lee survived a four-man playoff to win The Greenbrier Classic and his first PGA Tour victory.

The South Korean-born New Zealander earned US$1.2-million and became the ninth first-time winner on the tour this season.

The former US Amateur champion is assured a place on the PGA Tour for two seasons and a place in the PGA Championship, the year’s final major and has also qualified to play at the US Masters next April.

Lee, Canadian David Hearn, Kevin Kisner and Robert Streb were tied at 13 under at the end of four rounds on the Old White TPC course in West Virginia. It marked the third playoff in the tournament’s six-year history. A week ago, Bubba Watson won the Travelers Championship in a playoff.

After the first play-off hole, the par-three 18th, Kisner and Streb dropped out following birdies from Lee and Hearn.

That took Lee and Canada’s Hearn to the par-five 17th where Lee made par, which was good enough for victory as Hearn could only manage a bogey. 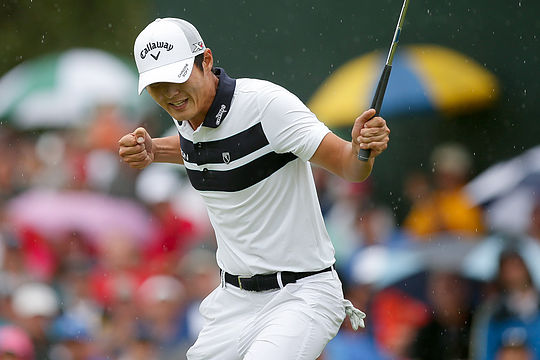 “It’s amazing, just amazing. I’ve been so close so many times this year and to win one, wow. This is what winning feels like.”

The win on the PGA Tour has taken some time for Lee, 24, which has seen him play between the PGA Tour and Web.com Tour since 2009, racking up two top-10 finishes before the 2014-15 season.

“Making it to the PGA Tour is not an easy thing to do,” says Lee. “I just wish that a lot more New Zealand or Korean younger golfers would come out here and play on the PGA Tour. It would be pretty nice. That’s all I can say.”

With another start guaranteed in the remaining majors, The Open and PGA Championship, Lee also is keen to make his mark in the bigger events having got his first win under his belt.

“I’m just very excited to play in another major, have another opportunity to go out there and play, try my best. But the US Open was a little bit tough for me. I got my ass kicked there. Hopefully I’ll do a lot better at this one. I’ve always wanted to play St Andrews. I cannot wait.”

Lee will climb from 152nd in the world rankings to 78th, giving him a much better shot at making the President’s Cup International team to take on the United States in South Korea in October.