New Zealander Michael Hendry has taken the first round lead with 6-under-par 65 at the Victorian Open.

Teeing off in the morning field Hendry got off to a shaky starting with a bogey on the 1st yet went on to post nine birdie in his first round. 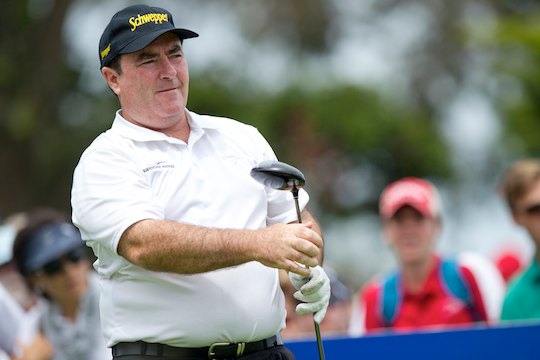 Coming back from the Christmas break a refreshed Hendry is one shot cleat of veteran Craig Parry heading into the second round.

“I think a holiday did me good, I was getting a bit stale at the end of last year and was playing pretty bad.”

“I haven’t done much over the break and all of a sudden I have been able to not worry about bad shots and just keep playing.”

If today’s round is an indicator Hendry looks to have returned to the form that saw him have a breakthrough year in 2010, highlighted by a win at the Indonesia Open on the OneAsia tour.

“Today was solid but I wasn’t hitting the ball great, especially off the tee but I hit a lot of really good iron shots and my putting was good today.

“Hopefully I can continue tomorrow the way I did today.”

Having taken advantage of the morning conditions and overcoming blisters was Craig Parry.

“It was quite fortunate that the wind wasn’t blowing, you just had to hit on the greens, and they were rolling true so I made the most of it.”

“I had a lot of discomfort with the blisters but beware the injured golfer,” joked Parry.

With a 5-under the card 66, Parry showed why he has been such a prolific winner over his career.

Sitting a further two shots back at 3-under is 24-year-old Rika Batibasaga from Queensland.

The later conditions proved to be a challenge for the afternoon field with just Max McCardle finishing under par.