Hiller, 17, fired a closing round of 67 to finish at 10-under after earlier rounds of 70-71-70 which sees the Australian Boy’s title added to his New Zealand Amateur and New Zealand Boy’s victories. 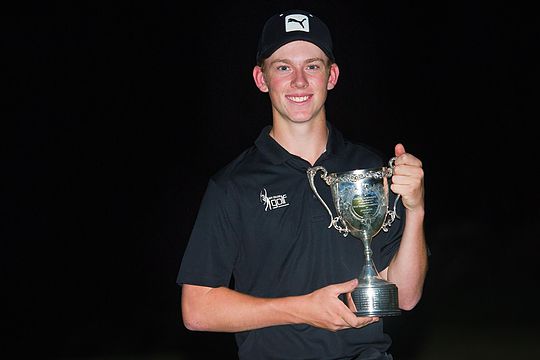 “It’s a very satisfying victory for me, to have both the Australian and New Zealand Boy’s titles,” said Hillier.

“I’m honoured to also be given an opportunity by Golf Australia to get a start now in the Australian Open. That was a pleasant surprise as I was not expecting that.”

“I just kept to my game plan, nothing too different, but certainly was able to close this event out the way I wanted to.”

“The course was not that easy. The fairways where running hard, but if you managed to play smart, there was a score to be had out there.”

Sanchez fired rounds of 73-75-66-70 to earn outright second position at 4-under, with Glenelg’s Lachlan Barker in third position at 1-under, the three the only players to finish under-par for the championship.

Cameron John, who started as one of the tournament favourites, finished in a tie for 4th position at 2-over along with New Zealand’s Henry Spring and Ballina’s Jay Mackenzie.

There were two holes-in-one recorded during the championship both going to NSW players with Jason Hong scoring his ace on the 18th during the third round and Thomas Heaton nailing a 6 iron on the 13th for his second ace in competitive golf.

Ulverstone Golf Club proved the perfect test for this elite amateur field. The course was fast and firm and the greens superb. This was reflected in the scoring where the second round cut came in at 10-over and every player that finished in the top-20 for the championship was off a handicap of scratch or better.

In fact there was no player with a handicap above +1 that finished inside the top-30.