Hillier held his nerve under immense pressure to birdie the final hole for a six-under 65, a 19-under total and a one stroke victory over Denmark’s Marcus Helligkilde. 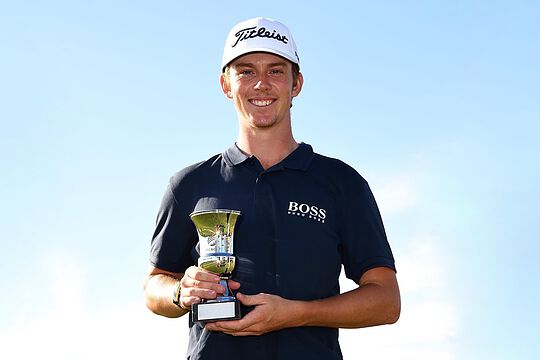 Both Hillier and Helligkilde were on 18-under par coming into the 18th hole meaning that Hillier had to make birdie to avoid extra holes. After hitting his approach shot to within four feet, the 23-year-old was left with a nerve-wracking putt which he nailed.

“I’m over the moon, it definitely wasn’t easy. Marcus, who came second, he put up a good fight the whole day, kept the pressure on me…just real stoked to get over the line,” said Hillier.

The victory earned Hillier €32,000.00 moving him up twenty-seven places on the Tour’s Order of Merit to move to 18th overall. The top-20 automatically earn a spot on the top-tier European Tour next season.

“That’s what I’m setting my sights on in two weeks’ time. It’s pretty easy to get excited for it when you know it’s your last tournament and you just need to make the most of it, so it’s going to be pretty exciting.”

Blake Windred finished the best of the Australians in a share of 37th position at 4-under par. Windred currently sits 39th on the Order of Merit with one final event left on the season’s schedule, the Challenge Tour Final starting 4th November in Spain.

The Final sees the biggest prize fund on the 2021 Road to Mallorca, meaning each one of the 45 players teeing it up in the Final can mathematically earn one of the 20 European Tour cards on offer.