New Zealander Josh Geary benefitted from his own good play and some equally good fortune to win the Buick Open at Mission Hills Golf Club’s Sandbelt Trails Course in Haikou, China on Sunday.

The opening event of the PGA TOUR China Series for 2015 came to a dramatic conclusion as Geary missed a short putt for birdie on the final green to finish at eight-under, only to see his nearest challenger Yi Cao from China lurch from one calamity to another over the closing holes. 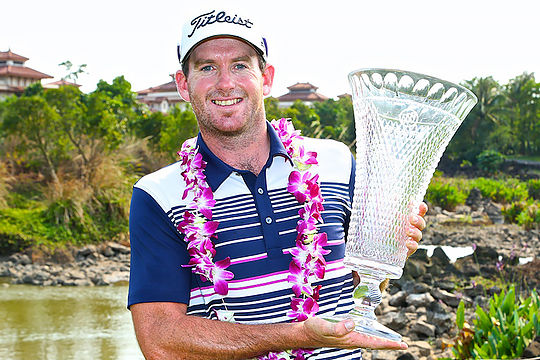 Cao pulled his second shot left on the 17th that lead to a bogey before finding an unplayable lie from the 18th tee, and then water with his fourth shot, on his way to a triple bogey to hand Geary the title by a stroke from defending champion J.H. Wang from Korea at seven-under par.

“I planned to win, and I had a pretty good day,” said the 30-year-old Geary, who improved on his scores every day on his way to a final round 68. “It was my best round of this week.”

Australian Jamie Arnold finished in a four-way tie for 4th at four-under while Anthony Brown shot a closing 65, easily the round of the day, to vault into a tie for 8th at three-under for the tournament.

The PGA TOUR China Series resumes in May at The Eternal Courtyard Open at St. Andrews Golf Club in Zhengzhou, starting on May 14.