A dominant final round of 7-under 65, saw Geary claim the title by five shots over Victorian Kris Mueck. 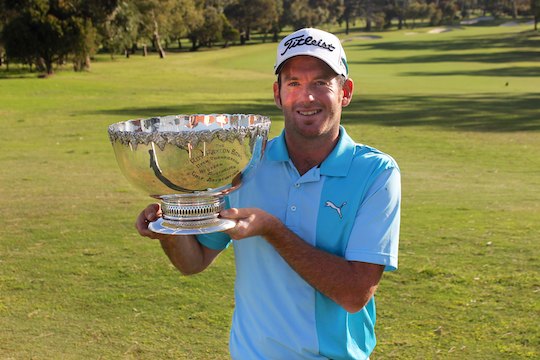 “I set out there with high hopes and played great all day. I kept within myself and managed to finish it off quite nicely,” said Geary who finished with a tournament total of 15-under 273.

“I was pretty relaxed, I tried to stay calm and not let the outside influences affect what I was doing.”

“You always want to have the battle on the final day. But it’s nice to know I had it somewhat sown up if I played within myself.”

“It has been six or seven years now that I have been trying for a win,” said Geary.

“The highest hurdle is the first one. Now I have broken through I should be good for the near future.”

With this win he earns a start in next week’s ISPS HANDA Perth International and secures his Tour card for the remainder of this season and 2014.

“This means a lot right now, especially with my status,” added Geary who attend PGA Tour of Australasia qualifying school earlier this year.

“It means I get a start next week which I wouldn’t have had. It also assures me starts all summer.”

“It is huge from my career point of view.”

“I have been hitting it well and putting great. My head is in a good place to I think I am ready for another couple of wins.”

Overnight leader, 23-year-old Victorian Kris Mueck, says he is happy with his second place finish and is looking forward to the rest of the summer of golf.

“I was nervous early on and I am relieved to be finished. But I am really proud of my back nine,” said Mueck who birdied the last to take outright second.

“I was out here to win but Josh had 7-under. He played unbelievable golf; he barely missed a shot which is a credit to him.”