That’s New Zealand’s Mark Brown’s nine-under-par effort for the front-nine at the par-70 Tauranga course in New Zealand on his way to shooting a record 59 at the Carrus Open on the Charles Tour in his native country. 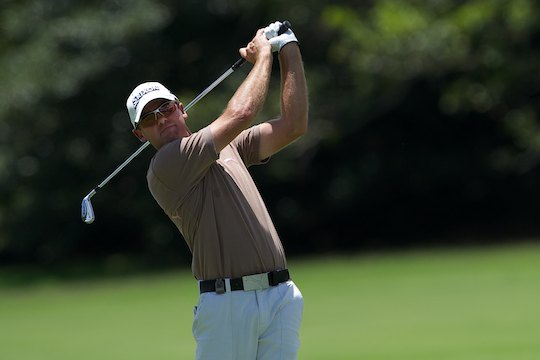 Brown became only the 16th player to break 60 in a professional event.

For the record he had three more birdies, plus a bogey and five pars on the back nine for an incredible 11-under par round of golf.

“It’s cool, I’ve had a couple of good rounds in my time but to actually have that magical number is a great feeling,” said Brown who also holds the course record of 62 at Melbourne’s Kingston Heath.

“It was just one of those days where everything went right.”

Ironically it didn’t start out that way as Brown actually began his round on the 11th hole and started par-bogey, with no idea of what was to come.

He simply ignited on the front nine reeling off five consecutive birdies before making eagle at the par-five sixth hole which he followed with a further two birdies to post a 9-under 26.

Brown held his nerve perfectly to birdie his final hole and join the elite 59 club.

“I hit four-iron off the tee on 10 because I knew I couldn’t get to the green, if I missed right with the driver I would have had no chip,” added Brown.

“I thought the best option would be to lay up and get a sand wedge in there close, I didn’t hit a great pitch but managed to hole the putt.”

Brown is a member of the PGA Tour of Australasia and in 2014 has played four events with a runner-up finish at the NZ Open, T6 at the Victorian PGA Championship and T14 at the Coca-Cola QLD PGA Championship.