Munn scorched the Sunday closing nine in a bogey free finish, that included an eagle, and three birdies to finish at 15-under-par and a three shot victory over Brett Drewitt and England’s Nathan Kimsey.

“That was one solid finish,” said Munn.

“I definitely hung in there on the front nine and the putter started working on the back and then the 10th kicked started the round with a nice eagle. I just went on from there.”

Munn went into the final round with a share of the lead at 9-under alongside Brett Drewitt and England’s Nathan Kimsey.

Heavy rain lashed the Belmont links layout making club selection difficult, yet the wind never got up and enabled players to play target golf with the pins. 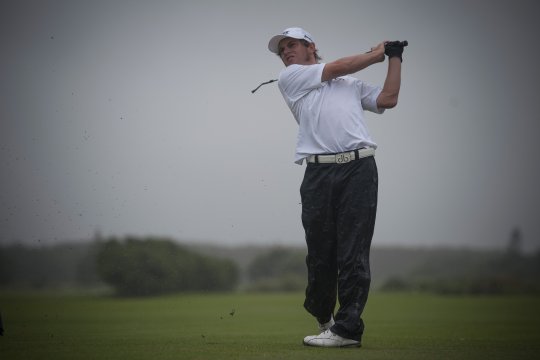 Josh Munn nails his approach into the 3rd at Belmont Golf Club during the final round of the Lake Macquarie Amateur (Photo: Anthony Powter)

“It was tiring out there,” said Munn.

“Keeping your concentration was half the battle, it was just hard work in these conditions. I just kept it one shot at a time. I know every one says that, but that is what I did.”

Munn left his opposition in his wake with his sensational closing nine at Belmont.

It was not that Brett Drewitt or England’s Nathan Kimsey played bad golf. They in fact did the opposite, with Drewitt and the Englishman carding a creditable final rounds of 3-under-par 69′s in wet and terrible conditions. 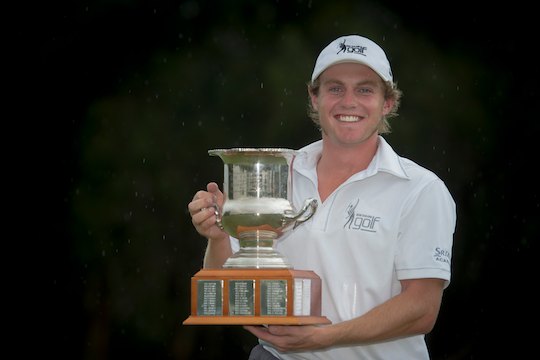 “It’s hard to catch a guy when he fires 5-under on the back in conditions like that,” said Drewitt, who will defend his NSW Amateur title this week at Royal Sydney.

“It was hard out there today. The wind may not have got up, but playing wet weather golf is always difficult. Overall, I am happy with this result and it gives me confidence leading into the NSW Amateur.”

Cameron Smith, winner last week in Melbourne at the Australian Amateur, secured another top-5 finish at 11-under to take 4th position with Brady Watt carding a final round 68 to round out the top-5 at 8-under-par.

Viraat Badhwar carded a 7-under-par total to finish in 6th position, a stroke ahead of Queensland’s Taylor MacDonald.

The last New Zealander to win the Lake Macquarie Amateur was Danny Lee in 2008 and Munn’s name will now be etched alongside previous winners including Marc Leishman, Jarrod Lyle and Geoff Ogilvy.

“This is such an honour,” says Munn.

“I came here with no expectations but knew my game was strong. This is a very satisfying victory and one that I dearly appreciate.”