Coming into the final round with a two stroke lead Paddison looked in control throughout the day before an untimely bogey on the 17th had him tied with compatriot Michael Hendry on 15-under the card. 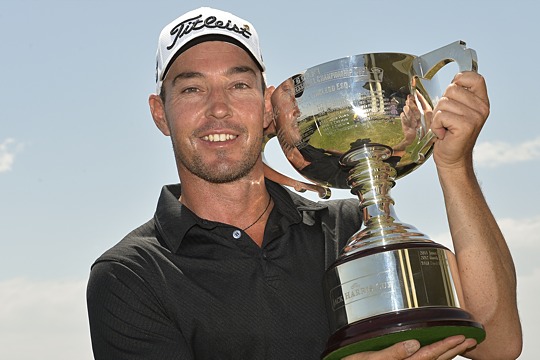 Putting himself in a strong position off the tee, Paddison made a clutch 3 foot uphill birdie putt on the 18th to claim his second Victorian PGA Championship.

“I was disappointed with my tee shot on the 17th but I couldn’t put the whole tournament down to one shot,” said Paddison who finished with a tournament total of 16-under 272.

“I still had a job to do. Golf is a real mental battle, to birdie the last when you have to, that is what all the practice is about.”

Playing in an all black Sunday outfit, Paddison’s national pride was evident.

“Mike played exceptionally well to draw level with me. To beat a compatriot, especially Mike Hendry, is great. He has beaten me enough over the years,” added Paddison.

“But it’s nice to see him playing well, first and second on the leaderboard is great for New Zealand golf.”

Paddison believed it was his tournament to win, having recently worked hard on his game with coach and PGA Professional Denis McDade.

“I was confident and always sure of myself on course. I hit some fantastic shots,” added Paddison.

“I did some great work earlier in the year with my coach Denis McDade. He said to me, that what I had now was good enough to win.”

“I felt that too and I came here determined to compete and felt like I should be up there.”

Conditions at the Heritage Golf and Country Club were challenging all day and Paddison was relieved it was finally over.

“The wind was so strong out there all day. It was very tricky. To be able to hold on to my lead and win by one shot was fantastic,” added Paddison who is already looking towards his next victory.

“This is my fifth win on the PGA Tour of Australasia and I feel I am over due to win an event overseas, which is my goal for this year.”

“It’s all out there for the taking and it’s off to a good start.”

Finishing outright second was Michael Hendry on 15-under 273. A further shot back was Jamie Arnold (NSW) and rounding out the top-5 were Kurt Barnes (NSW) and Andrew Martin (VIC) on 12-under 276.

For all final scores from the Lexus of Blackburn Victorian PGA Championship please click here.

The PGA Tour of Australasia now heads to City Golf Club in Toowoomba for the Coca-Cola Queensland PGA Championship.