New Zealanders Harry Bateman and Ryan Chisnall have mastered the RACV Cape Schanck Resort to share the lead following the opening round of the Victorian PGA Championship.

Bateman’s round was particularly impressive, presenting a clean scorecard in what is a notoriously windy part of the country. 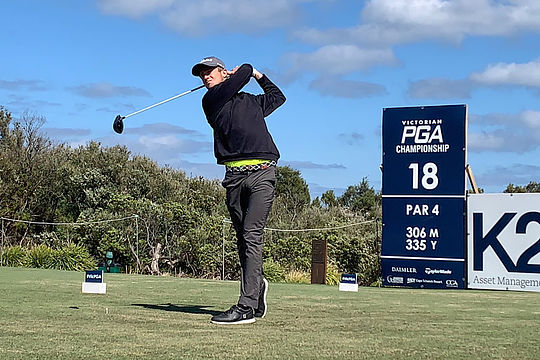 “It was challenging, it was really gusty and you had to be on your game,” said Bateman.

“I had to hit the ball the best I’ve hit it in a long time and made a few putts as well so it was a great result.”

Playing a new course on the ISPS HANDA PGA Tour of Australasia, Bateman said while it’s not long off the tee, it’s easy to lose your bundle and shoot a big score.

“It’s one of the shortest courses we’ve played on Tour but with the wind like this and the greens the way they are, you’ve got to hit it in the right spots otherwise you’re doing well to make bogey.

“It feels like if you hit a bad shot you can make double just like that so to keep it bogey free is really satisfying.”

Bateman’s countryman Chisnall was on track for the outright lead, he was 7-under before consecutive bogeys on the 16th and 17th holes halted his momentum on the way into the clubhouse.

“It was an interesting one, I’m happy with 5-under, I’ll take it and run,” said Chisnall who is still in his first year as a professional.

“It was disappointing in the end to finish the way I did with the bogeys on 16 and 17 but I’m happy with that score.”

“To shoot that in those conditions, the flags weren’t overly easy as well, so if you would’ve told me I’d have 65 I definitely would take it,” added Chisnall.

“The key to this course is getting in play as much as you can and then putting it in the right spots on the greens so hopefully more of the same tomorrow.”

The New Zealander is coming off a runner-up finish in the Harewood Open on the Charles Tour across the ditch.

“It’s been good to get golf in before this week, it’s been a quiet winter for me so to play well last week leading into this run of tournaments and get into a bit of form is really pleasing.”

Darren Beck and Nick Flanagan are two shots back at 3-under the card followed by Neven Basic and Rick Kulacz at 2-under.

Maverick Antcliff and amateur partner Danny Lovell are leading the Victorian PGA Championship Celebrity Challenge at 11-under with Josh Younger and Campbell Neal (a) at 9-under and Daniel Gale and Ozkan Sahin (a) third at 8-under.