Kiwis dominate on day one at Fiji International

The Fiji International has taken on a Kiwi flavour on the opening day with Daniel Pearce topping the leaderboard.

As usual the oceanside course was battered by strong winds but that didn’t bother Pearce who was rolling in putts from everywhere, his longest from 40 foot.

“I holed a really nice putt on the 1st hole for birdie that got the momentum going in the right direction. I managed to birdie the 11th as well and made a couple of good up and downs through the back-9 to save par,” said Pearce. 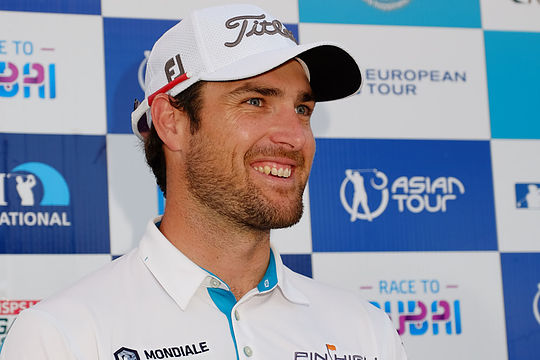 “I birdied 17 and then had a bit of a run through the front-9, the first four holes. It was just a lot of good golf.

“It was quite breezy when we first started but I think the wind definitely eased as the round went on.

“It got a little easier but the putter was pretty hot today. I rolled in a lot of putts from all over the place which was nice.”

Also happy with his first round performance was Campbell who is enjoying the new options that Vijay Singh’s re-design offers.

“I thought anything under par today would be a great score. It wasn’t easy out there that’s for sure. I am really happy with my start and I think most tournaments you would take 5-under first round,” said Campbell.

“The re-design is great. Some of the tees like the 1st hole and the 9th you are always taking driver off them now whereas before only if you were playing great you would take driver.

“Then 14 going around to the left, I didn’t really like that hole before but now it gives you so many options, you either go at the green and hit up to the right or you go short of the bunker. When you have options it is nice.”

A further shot back on 4-under the card are Gavin Green (MAS), Adam Bland (AUS), David McKenzie (AUS) and Peter Wilson (AUS).