Patton Kizzire and Brian Harman won the QBE Shootout on Sunday, eagling the par-5 17th and closing with a par for a one-stroke victory over Graeme McDowell and Emiliano Grillo.

Kizzire and Harman shot an impressive 11-under-par, 61, in the better-ball final round to finish at 30-under-par at Tiburon Golf Club. They opened with a 59 in the first-round scramble and had a 66 on Saturday in modified alternate shot.

“We knew we needed at least birdie and eagle was a bonus,” said Kizzire. “He had a great iron shot in there close and freed me up, and I hit a good one, too. We both had looks at it. I putted first and made it. That was huge.”

The team had held a share of the 36-hole lead, and made quick moves with three birdies in their first five holes. 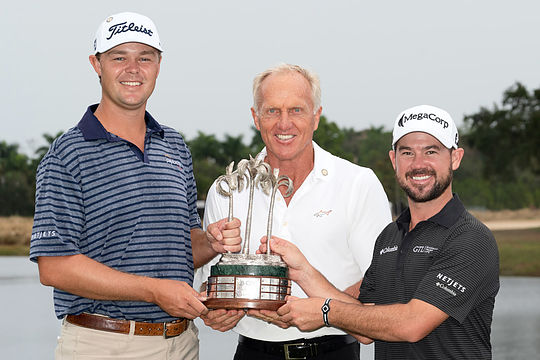 A run of pars from the fifth stalled their momentum for a short time, but a birdie on the ninth started a trio of gains that led to a back-nine 29.

At one point, they were part of a four-way tie at the top that included McDowell/Grillo, Bubba Watson and Harold Varner III, and Luke List and Charles Howell III.

It was yet another disappointing second place finish for Graeme McDowell, who was hoping to get the monkey off his back at this event. The pair were also looking to become just the second all-international team to win the title since Greg Norman and Steve Elkington in 1998.

“I missed a birdie from about two feet on the 5th today, which I thought was going to prove quite costly at the end and it was,” said McDowell.

“I’m also disappointed that that’s the way I’m going to finish my year but there’s a huge amount of positives in my game, and the way Emiliano played this week.”

“This is one of my favorite tournaments but another second place for me, I think that’s about three of them.”

“So, looking forward to getting back here next year and trying to go one better.”

There was a three way tie for third with Gary Woodland/Charley Hoffman, Kevin Na/Bryson DeChambeau and Luke List/Charles Howel III all closing at 28 under.

Tony Finau, who was playing with LPGA star Lexi Thompson, fired a final-round 65 to finish seven shots off the lead and seventh overall in the 12-team field.