Kizzire holds off Fowler to secure first win at OHL

American Patton Kizzire fired rounds of 66 and 67 at El Camaleon to finish one stroke ahead of Rickie Fowler at 19-under to earn his first career win on the PGA Tour at the OHL Classic at Mayakoba.

Fowler, who carded two 67s on Sunday, has now finished in second place 12 times in his PGA Tour career, and three times in his last 11 starts.

The final group of Kizzire, Fowler and Patrick Rodgers had to play 36 holes on Sunday thanks to lengthy delays during the event.

Kizzire took control early with birdie putts on the 2nd, 4th and 5th holes to move four shots clear as Fowler cancelled out two birdies with two bogeys. Fowler then moved on the 6th to get back to within three shots from Kizzire.

After making birdie on the 11th hole Kizzire had widened his buffer. Fowler was left to rue several missed chances on the greens. 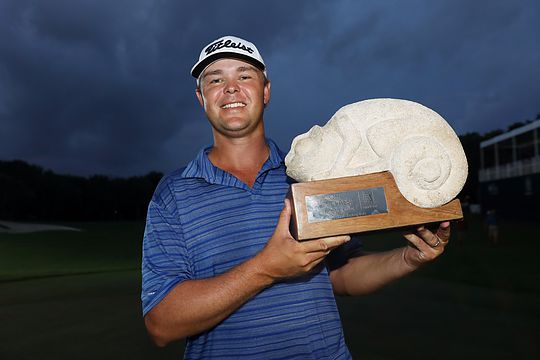 Despite birdies at 13, 15 and 17 to reduce the gap to one, he left his final birdie attempt short – leaving Kizzire two putts for the win.

“It was pretty nerve-wracking, but I felt good,” said Kizzire. “I’ve been in tough spots before and I drew from that from all my experiences.”

“It means a lot, I’m pretty excited right now, pretty emotional and I was glad to get it done. Rickie made me work hard.”

Again for Fowler it was another close finish on the PGA Tour, the 12th time in his PGA Tour career he has finished second, yet the consolation prize sees Fowler moving to No. 7 in the world.

“We gave it a run, kept Patton honest, but he earned it out there today,” said Fowler.

In nine seasons on tour, Fowler has six wins across the PGA Tour and European tour which includes a Players Championship but not yet a major title. Fowler is poised to win more and win majors, soon, and that was again confirmed on the weekend.

He’s a player who rises to the occasion, as shown at his first win at Quail Hollow in a playoff and at his win at The Players.

Yet you cannot help feel this was another tournament that got away for Fowler.

Matt Jones was the best of the Australians finishing in a tie for 50th position, a final round 73 damaging his week and seeing him slip 21 places.

Geoff Ogilvy also carded a final round 73 to finish in a tie for 68th position at even par along with Greg Chalmers. Aaron Baddeley rounded out the Australian lineup finishing at 2 over and in 74th position.