American Patton Kizzire has defeated James Hahn in six extra holes to win the Sony Open to become the first multiple winner on the PGA Tour this season.

Kizzire, who won the OHL Classic in Mexico late last year, closed with a 2-under 68 before Hahn shot 62 to force the playoff after the pair finished at 17-under.

The two then went shot-for-shot in the playoff, with matching pars on 18 then birdies on 18. The pair missed birdie attempts on 17 before exchanging birdies again on 18 on short putts.

On the sixth extra hole at Waialae Country Club, Hahn’s two metre par putt on the par-3 17th slid wide right, leaving Kizzire a half metre putt for par that he made for the win.

The victory was the second in Kizzire’s last four starts with his previous win coming last year over Rickie Fowler in the OHL Classic in Mexico. It was also the longest playoff in more than five years on the PGA Tour.

Kizzire made 15 pars in his first 18 holes to get into the playoff (that included an eagle, a birdie and a bogey, too) and then played the six playoff holes in 2-under. 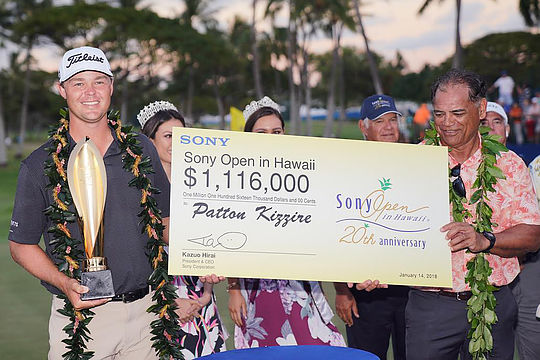 “This is huge for me,” Kizzire said. “One win doesn’t necessarily mean a whole lot, two means a little more, and three is even better. I’m always looking for the next one. I’m super excited right now.”

Hahn had played a superb final round of 62 to set a clubhouse leading score but had to wait nearly an hour to see if the 54-hole leaders could match him and Kizzire did. Hahn was obviously disappointed that he’d let slip an opportunity to gain a win early in the season.

“I had an opportunity to win and didn’t pull it off,” said Hahn. “I hate losing so it’s going to push me to be better. I need to get better. I’d rather lose by 100 than lose by 1. I’d rather miss the cut than lose in a playoff. It just doesn’t sit well with me. I feel really defeated right now.”

As far as form, he’s made the cut in five of the six PGA Tour tournaments for the season so far.

Greg Chalmers missed the cut along with Aaron Baddeley.