Almost 20 years ago, KJ Choi was the first South Korean to win on the PGA Tour and now he has repeated that feat on the Champions Tour at the Pure Insurance Championship following his two-shot win over German duo, Bernhard Langer and Alex Cejka.

The 51-year-old narrowly missed victory in a playoff at the recent Sanford International. 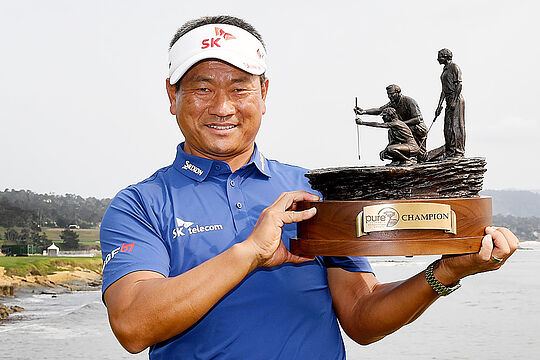 “My last win was the 2011 Players, 13 years ago so I really wanted to win. So this is very special, my dream is winning,” said Choi getting his dates slightly confused.

While he has tasted success in South Korea, it had been 10 years, 4 months and 11 days between trophies on US soil.

“You know, any win is special. All of the legends are still good, still long hitters. I’m following guys like Mr. Bernhard Langer, the scoring is still very good. I’m happy on Champions Tour so all is good.”

Stuart Appleby, playing in his first Champions Tour event shared 34th position, with David McKenzie in a share of 38th. John Senden rounded out the Aussies to make the weekend finishing in a tie for 43rd position.

On Friday, Appleby opened with a 66 to share the first round lead with Alex Cejka and was seeking his first win since the 2010 Greenbrier Classic on the PGA Tour. A second round 77 put an end to his chances before settling for a 72.