Defending champion and tournament host, KJ Choi, has successfully defended his title at the CJ Invitational hosted by KJ Choi.

42-year-old Choi completed his third round at the Haesley Nine Bridges Golf Club on Sunday morning, following a 27 hole final day after heavy fog delayed play for up to four hours during Saturday’s third round. 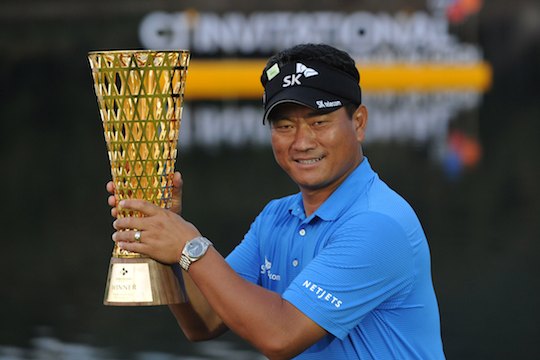 His third round 68 left him tied for the lead with countryman and fellow PGA Tour player, Bae Sang-Moon, heading into the final round of the Asian Tour event.

However, Choi played the back nine of the final round in 32 strokes to draw clear and was able to hold off Bae and Dang Jyong-Kyu for a 15 under par total and a 2 shot victory – his 20th career victory and his first of 2012.

Australian Scott Hend shot a final round 70 to share 5th place with Charlie Wi of Korea at 10 under par. Darren Beck was the next best Australian in a tie for 15th at 5 under par with Scott Barr further back at even par.

Adam Blyth, Marcus Both and Rick Kulacz were the other Australians to survive the cut for the weekend.