Søren Kjeldsen ended his six year wait for a European Tour title after he won a three way playoff at the Dubai Duty Free Irish Open Hosted by the Rory Foundation.

The Dane birdied the first playoff hole to deny Austrian Bernd Wiesberger and England’s Eddie Pepperell, the latter earning the considerable consolation of a place at St Andrews for the Open Championship in July. 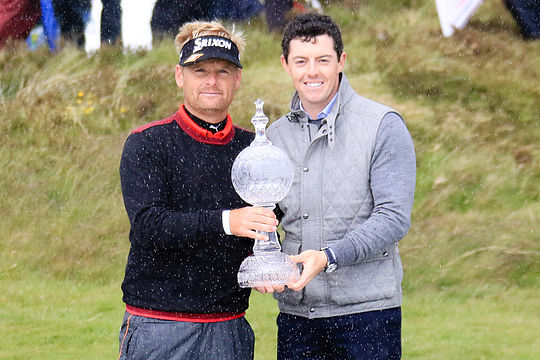 Kjeldsen had begun the day two strokes ahead of the field but tentatively secured his place in the playoff after shooting a final round 76.

The 40-year-old, who had not won since the 2009 Open de Andalucía de Golf, held his nerve when it counted up the 18th for a second time as he saw his birdie putt rattle around the cup before falling in.

Pepperell had produced one of the rounds of the final day as he defied the windy conditions to shoot a bogey-free 69 – only four players shot under par rounds today – and set the clubhouse mark at two under.

Wiesberger joined the young Englishman with a final round 73, but they were left to wait on Kjeldesen who was a stroke ahead with two holes to play.

Kjeldsen had bogeyed both during his third round and when he three putted the 17th, he was left to hold his breath as a par putt at the 18th only just dropped to ensure he was a part of the playoff.

He recomposed himself superbly to take immediate control on the extra hole with a drive down the middle of the 548 yard par five 18th fairway. The Dane then reached the green with his second stroke while Wiesberger and Pepperell took longer routes.

Pepperell was unable to chip in to keep his hopes alive and when Wiesberger then failed with a 20 foot putt from the back of the green, Kjeldsen was left to stroke home his winning putt – albeit after the ball did a loop around the hole.

Richard Green topped the Australian players this week at T10 for his best finish of the season and his fourth top ten at this tournament over the past decade.

Recent US Open qualifier Marcus Fraser finished equal 43rd with Andrew Dodt and Scott Hend at 16-over in a tie for 65th.