France’s Joanne Klatten has certainly enjoyed breaking free from the Parisian winter after picking up her second win in four days as the 2014 ALPG Club Car Series gathers pace.

Klatten won the BWAC Yamba ALPG pro-am on the NSW north coast on Tuesday, in a playoff with Queensland’s Bree Arthur, and back it up with a five-under par 66 to win the Ingham Antill Park ALPG pro-am by shot from the New South Welsh pair of Sarah Kemp and Corie Hou on Saturday. 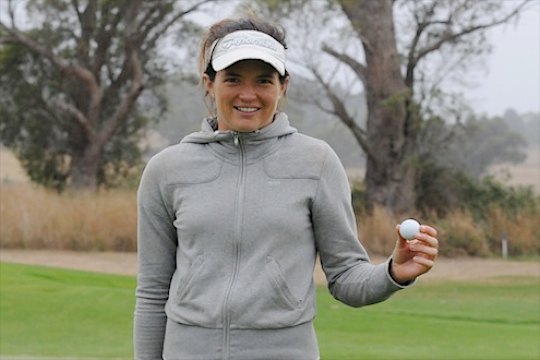 Clearly delighted with her start to the year, the Frenchwoman accredited her strong start to her team back in France, especially conditioning coach Phillippe Glickman who has been working her hard in the gym in preparation for the ALPG and LET seasons ahead.

The Series moves to the temperate climes of the NSW Southern Highlands with back to back events, starting at the Moss Vale Golf Club ALPG Pro-Am from 13 – 14 January followed by the Mount Broughton Classic Presented by McGill’s Transport at the tough Mt Broughton Golf Club from 17-18 January.

The fields for the Southern Highlands events have been strengthened by the arrival of a number of European and American Tour players, including English veterans Laura Davies and Trish Johnson, Wales’ Becky Brewerton, South African Stacy Bregman and the Scots Kylie Walker, Pamela Pretswell and Vikki Laing.