The Florida-based Knox first had to play the last hole of his third round that he birdied before then producing a closing score of 68 to win by two shots with a 20-under par total on the Sheshan course.

American Kevin Kisner, who officially shared the third round with Knox, finished runner-up with a 70 for an 18-under par tally.

England’s Danny Willett stormed his way to third in stunning fashion early in the day, posting ten birdies in an unblemished 62 which proved to be the round of the week and moved him closer to Race to Dubai leader Rory McIlroy.

Knox becomes the first Scotsman to win a WGC event and he held his nerve on the back nine, opening a two shot lead with birdies on the tenth and 11th before a sixth birdie of the day on the 16th calmed any nerves.

“I always kind of thought I was going to win a big one for some reason as my first one. I’ve been close a few times before but this is going to take a long time to sink in,” said Knox. 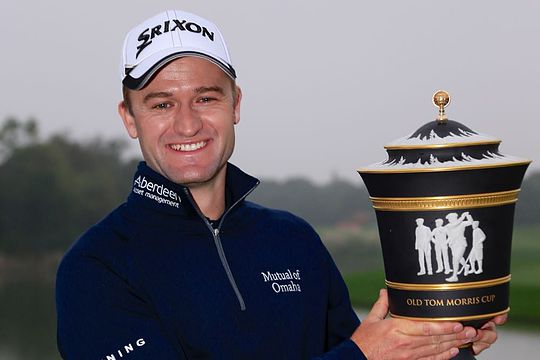 “It’s incredible. I always hoped it was going to happen but you’re just never sure. There’s just so many unbelievable players on tours all around the world and to win at this stage is a dream come true. I still can’t quite believe it.”

“Winning any level is the hardest thing you can do, and especially because I’ve never won a big one like this. It was tough but I just kept holing putts, and golf is so much easier when that happens.”

For Kisner, it was another second-placed finish for the man who has been beaten in three play-offs on the PGA Tour in 2015.

England’s Ross Fisher was alongside Willett at 17 under after a closing 68 with Branden Grace and Dustin Johnson a further shot back.

Matthew Fitzpatrick, local favourite Li Haotong, Patrick Reed and Jordan Spieth, who returned to world number one with his finish this week, were then at 15 under, with McIlroy in the group of six players another shot behind.

Marc Leishman was the best placed of the Aussie field after weekend rounds of 65 and 68 took him into a six-way tie for 11th place. Scott Hend finished another three shots back in a tie for 19th at 11-under.

Adam Scott’s heroics at last week’s CIMB Classic unfortunately gave way to four rounds in the 70′s this week with the former world number one finishing in 70th place.

The European Tour stays in Shanghai this week for the $7 million BMW Masters at Lake Malaren Golf Club.