Scotland’s Russell Knox has stormed into Ryder Cup selection contention and has also burst back into the world’s top-50 with a stunning play-off victory at the Irish Open.

Knox not once but twice holed two birdie putts each of some 50-feet on the 18th green to win for the first time on European soil.

The Scot first grabbed the 14-under par clubhouse lead with a curling 50-foot biride in a round of 66 before being joined by big-hitting Kiwi Ryan Fox, who had posted a 68 and Knox then at the first extra hole holed a similar length biride putt from virtually the same spot on the 18th to claim the whopping £891,000 first prize cheque.

The win, his seventh success as a pro, will lift Knox some 38 spots to the new World No. 49 and fifth on the Race to Dubai. 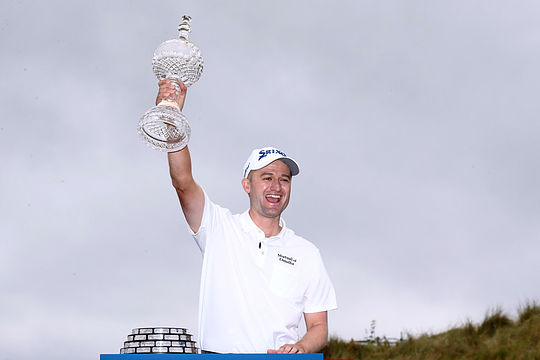 The Scotsman has also leapt 20 places to 8th on the European Ryder Cup ‘World’ points table and just four places shy of qualifying automatically for Thomas Bjorn’s team after being snubbed two years ago as Hazeltine ‘wildcard’ selection.

And Knox heads to this week’s Aberdeen Standards Investments Scottish Open ready to also kick down the Gullane victory door ahead of teeing-up a week later at Carnoustie.

Knox’s success, only the second Irish win by a Scot since Colin Montgomerie in 1991, also comes after he posted a stunning 65 a week ago to finish joint runner-up in the French Open.

Victory makes amends somewhat after he was second to Irish Open tournament host, Rory McIlroy in the 2016 event at the K Club.

And it was McIlroy who presented the gleaming Waterford crystal trophy to Knox.

Knox said: “The putts have been going in these last couple of weeks and I just had a great feeling on the greens and I wasn’t really aiming but just reacting to the line of the putt.”

“I just kept going and going and this is unbelievable.”

Knox now has two weeks on home soil with not only the goal of a first Scottish Open triumph but matching Paul Lawrie’s feat of becoming the second Scot in three Carnoustie Opens to lift the Claret Jug.

“I am thrilled to go back to Scotland for two weeks where I grew up,” he said.

“But right now, I’m going to enjoy this victory and this tournament. I’ll cross that bridge next week, but obviously over the moon right now, and can’t wait for everything.”

Fox’s consolation was a tee-time into The Open and with Nuneaton’s Andy Sullivan (69) and South African Zander Lombard (69) securing the other two Carnoustie places.

Wade Ormsby and Adam Bland were the best of the Australians in a share of 49th place with Andrew Dodt another shot back at 2-over and equal 72nd.