New Zealand’s Lydia Ko has claimed her 16th LPGA Tour career victory at the LOTTE Championship in Hawaii on Sunday finishing in style with back to back rounds of 65 at Kapolei Golf Club.

It was Ko’s first victory in 1,084 days, or nearly three years, with a tournament-record 28-under, beating World No.2 Inbee Park by seven shots. It’s also the third-lowest 72-hole score of all time on the LPGA Tour, trailing Sei Young Kim’s record of 31 under at the 2018 Thornberry Creek LPGA Classic. 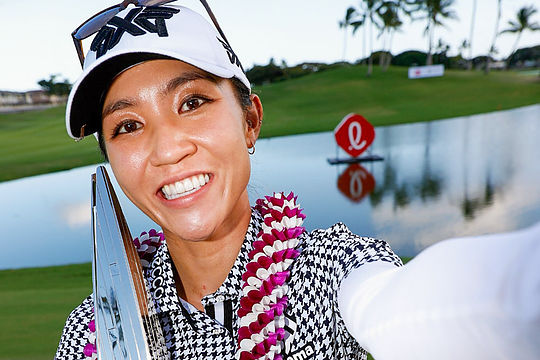 Ko, who turns 24 next Saturday, won 14 times in her first 81 starts, including twice as an amateur in 2012-13 but she had only won once since. The victory was no doubt timely for Ko, who at times questioned if she would again return to the winner’s circle.

“Hand on my heart, I know there were times that I wondered ‘Hey, I don’t know if I’m ever going to be back in the winner’s circle’,” said Ko.

“But I’m obviously grateful for everything that has happened in my career, and I believe that we’re in the position that we’re meant to be in.”

“I’m super excited to be back here in the winner’s circle. It puts down the doubt that I had in myself. I’m just going to keep working hard and see what happens from here.”

Known for her ever-changing caddies and coaches over the years, Ko’s US$300,000 first prize pushes her over the US$11.5 million mark in career prize-money.

Hannah Green was the best Australian performer, sharing 12th position at 17-under, Su Oh was three further back in a share of 27th position and the last of the Aussies to make the weekend.

Minjee Lee and Gabi Ruffels narrowly missed the cut by one, with Katherine Kirk and Sarah Jane Smith also missing the weekend.